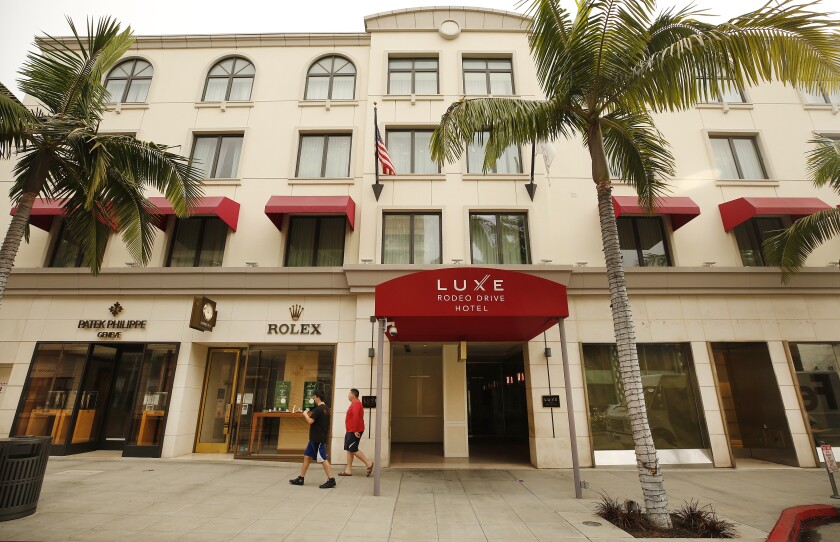 The Luxe Rodeo Drive hotel in Beverly Hills has shut down, citing the financial effects of the pandemic. The steep decline in tourism and business travel has devastated the hotel industry. (Al Seib/Los Angeles Times)

Located on one of the world’s most expensive strips of commercial real estate, the upscale Luxe Rodeo Drive hotel has closed, a casualty of a pandemic that is likely to put more hotels out of business.

The 86-room hotel, which for 27 years shared a city block with such high-end outlets as Cartier and Harry Winston, notified its workers last week that it would permanently cease operations because of the financial effects of the COVID-19 crisis.

“Please accept my sincerest gratitude for your service and loyalty and know that this decision was not made lightly,” Efrem Harkham, the chief executive of Luxe Hotels, which owns or operates three other hotels in Los Angeles and New York, told workers in a letter.

The Luxe Rodeo Drive is the first high-end hotel in the Los Angeles area to go out of business because of the pandemic, and industry experts point to an unusually high loan delinquency rate among hotel borrowers as a sign that more closures are likely to follow.

“We know there is a tsunami outside. We know it’s going to hit the beach. We just don’t know when,” said Donald Wise, a commercial real estate expert and co-founder and senior managing director at Turnbull Capital Group.

The steep decline in tourism and business travel has devastated the hotel industry.

Aron Harkham, president of Luxe Hotels and son of Efrem Harkham, said in an email that the Rodeo Drive location “got caught up with the bad timing of the global travel market” by launching a full remodel just before the pandemic struck.

Given the drop in demand for hotel rooms, he said Luxe Hotels is now considering “alternative options” for the property, which is owned by the Harkham family under a limited partnership.

High-end hotels have also closed in other parts of the country, including the 44-story Hilton Times Square hotel in New York City, which went out of business this month.

Ashford Hospitality recently turned over the keys to its newly purchased Embassy Suites in Midtown Manhattan to its lender after the real estate investment trust fell behind on debt payments, according to CNBC.

The owner of Chicago’s Palmer House Hilton hotel was sued by Wells Fargo last month, accused of defaulting on a $333.2-million loan. The lawsuit asks the court to appoint a receiver for hotel operations, according to the Chicago Sun-Times.

Nationwide, it’s not clear how many hotels are behind on their loan payments. But figures are available on hotel loans that have been bundled and sold to investors as commercial mortgage-backed securities. Payments on 16.77% of those loans are more than 30 days late, according to Fitch Ratings — up dramatically from less than 2% before the industry began feeling the pandemic’s financial effects.

“The clock is ticking on loans for hotels and restaurants, and there is going to be a sharp uptick in delinquencies,” said Lloyd Greif, founder and chief executive of the investment banking firm Greif & Co.

In Southern California, nearly 60 hotels in Los Angeles and Orange counties are more than 30 days delinquent on their loans, including the Embassy Suites by Hilton in Palmdale, according to the data firm Trepp.

An executive with the management company that operates the Embassy Suites in Palmdale and 52 other hotels said some of the hotels in its portfolio are struggling to stay in business while others are overcoming the pandemic, with occupancy rates as high as 80%.

More hotels have not yet closed permanently because they were able to take advantage of the funding provided by the federal Paycheck Protection Program or because banks have been forgiving of loan delinquencies for the last few months, said Wise, the commercial real estate expert.

But he expects that such clemency won’t last long.

Hotels that primarily cater to conventions and business travelers are more at risk of closing because such travel has all but disappeared, according to industry experts. Meanwhile, hotels located in popular car-accessible vacation destinations, such as Santa Monica, Santa Barbara and San Diego, seem more likely to survive the crisis thanks to a slow increase in leisure travel.

“All the drive-through markets are starting to get business back,” said Alan X. Reay, president of Atlas Hospitality Group. “A number of owners are starting to see light at the end of the tunnel.”

New York has over the last few years experienced a surge in new hotel construction to serve a boom in international visitors and many of the hotels that close due to the pandemic will likely convert to residential properties or offices because of the glut of hotels, Reay said. In Southern California, it is unclear what will become of shuttered hotels.

Wise said some could reopen as student housing for nearby colleges, senior citizen housing facilities or condominiums, but for that to happen, local policymakers would have to be lenient in adopting new zoning rules. He predicted that large hotels near convention centers that go out of business would not have the option to convert to anything else.

“There is no playbook for a pandemic,” he added.

Former hotel worker Oscar Melara, 60, had been working at the Luxe Rodeo Drive location for 39 years, starting before the Harkham family took over the property. He began his career as a dishwasher and worked his way up to cook.

The hotel had been closed since March when the pandemic struck, but Melara and his co-workers held out hope that it, like several other hotels in the L.A. area, would eventually reopen and rehire them.

Over the years his co-workers had become his second family, he said, and the $22 an hour he earned was enough to pay his bills and send money to his sister in El Salvador to help her make ends meet.

Then the letter from Harkham arrived, saying it was over.

“When you work most of your life for a place and it closes, it’s not fair,” Melara said.