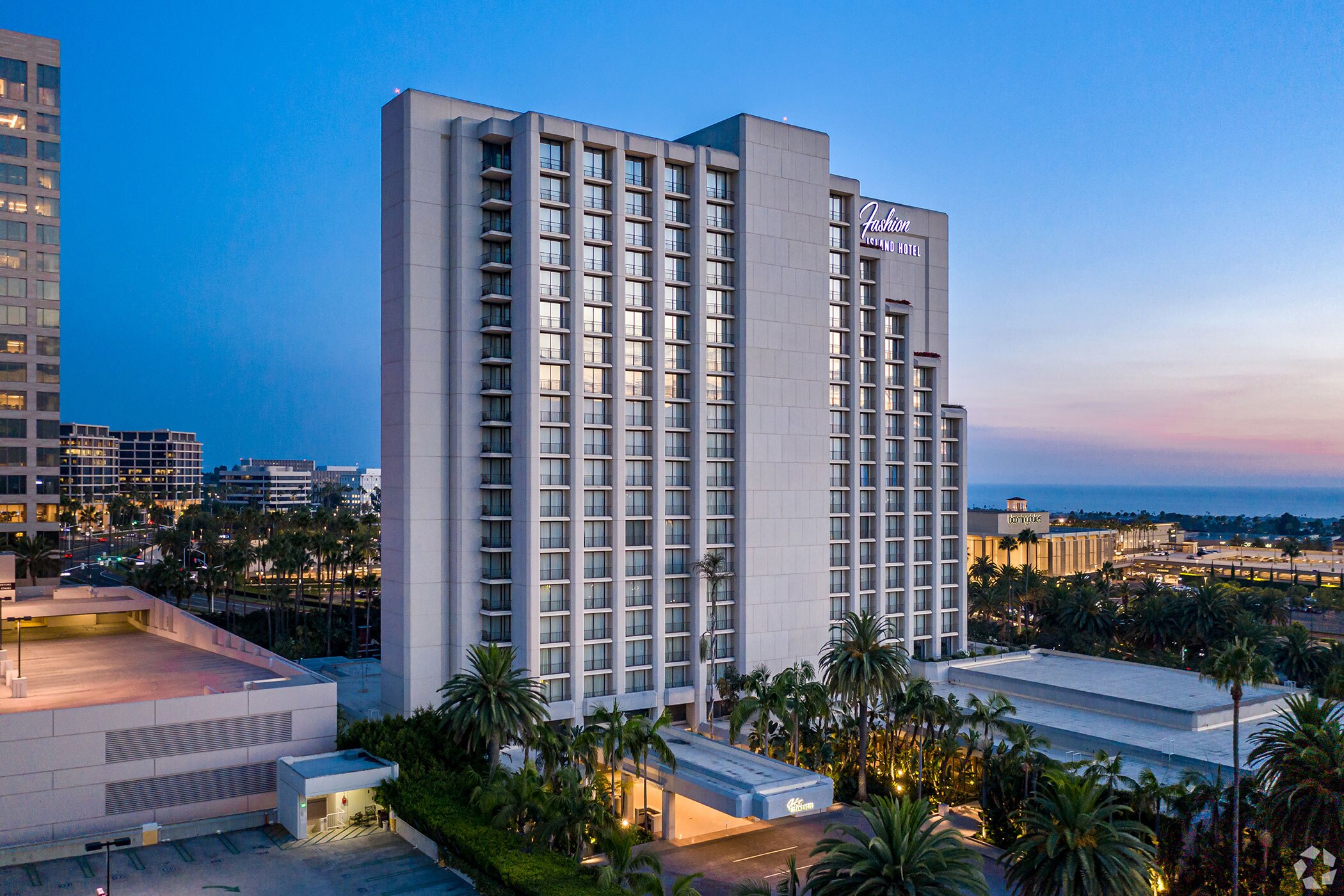 The 295-room Fashion Island Hotel Newport Beach, set to become a Pendry Hotel in 2023, was California’s highest-priced deal in the first half of 2022 with a $145 million leasehold sale. (CoStar)

While hotel sales in California cooled from their highs last year, transactions during the first half of 2022 set a new median-price-per-room record and approached other records as well.

Atlas Hospitality Group’s California Hotel Sales Survey 2022 Mid-Year reports that the state had 263 individual sales during the first half of the year, down 9.9% from the first part of 2021. Total dollar volume reached $3.49 billion, a 33.59% year-over-year decrease. However, the state achieved a new record in median price per key at $143,443, a 12.7% year-over-year increase.

Los Angeles County led with the highest number of hotel deals with 36. The deal with the highest price per room was Orange County’s 295-room Fashion Island Hotel Newport Beach, which will become a Pendry Hotel, in a $145 million leasehold sale that breaks down to about $491,525 per room.

“The sales have cooled off a little bit from the record pace that was set in the first half [of last year], but it still came in as the second-highest number of individual sales and the third-highest total dollar volume in that six-month period,” Atlas President Alan Reay said.

Hotel deals should continue to cool dramatically in the second half of this year because of rising interest rates, uncertainty in the economy and recession worries, he said. The areas with hotels that struggled the most during the pandemic, namely urban locations, are already showing signs of the slowdown.

In 2021 and even through the first half of this year, buyers were aggressive on pricing, Reay said. Without current numbers, they relied on 2019 net operating incomes and were still paying relatively low capitalization rates.

The time it has taken for the market to recover combined with increasing interest rates and lenders not only becoming more cautious but, in some cases, pulling back from the hotel space will mean fewer deals involving full-service properties in urban areas, Reay said. There should still be good buyer demand for limited- and select-service hotels as well as extended-stay properties.

Some of the largest buyers are also some of the largest sellers, Reay said. Blackstone has made several acquisitions, including the hotel franchise company Extended Stay America in a joint deal with Starwood Capital, but it’s also been a big seller of Motel 6 properties.

Many publicly traded real estate investment trusts have been active as well, he said. Pebblebrook Hotel Trust has sold a number of its hotels and reallocating the capital for acquisitions. Park Hotels & Resorts announced during its recent earnings call it planned to sell another $400 million worth of assets.

California also has a lot of Project Homekey funding, giving sellers the opportunity to take advantage of 1031 exchanges, he said. Project Homekey is a state-sponsored program that provides funding to local and county governments to buy old hotels and motels to convert them into housing for the homeless or those at risk of homelessness.

There weren’t a large number of Project Homekey deals during the first part of the year, but that’s due to how the approval and funding process works, so those deals should come through in the second half of 2022, Reay said.

There are companies that specialize in buying hotels, and even some for office buildings, to convert to apartments, he said. Oftentimes the hotels are in the economy segment, and extended-stay hotels are a target in particular because of the ease of converting them since they already have kitchens.

Two large factors that affect hotel valuations are a recession, which hurts hotels more than other commercial real estate classes because of hotels’ daily rate business model, and oversupply, something that’s not usually an issue in California, Reay said.

In working with Atlas’ clients, Reay said he’s advised them that there has been a big jump in the cost of debt over the last 45 to 60 days. That affects what people can pay for a hotel and the return they can expect to get.

“So, either the net operating income has to go up in order for your pricing to go up, or you have to adjust your expectations down,” he said.

Not only are interest rates going up, lenders are pulling back from office buildings and hotels, Reay said. With fewer lenders available, that means the cost to borrow goes up. Those who remain active are becoming more conservative, resulting in having to put in more equity.

“As all of those things add up, it’s causing a bit of a shrinking in the buyer pool,” he said.

Similar to the housing market, there were plenty of buyers ready to come in with cash and above list price, he said. That wasn’t sustainable, and buyers are now coming in more aggressively on their terms.

“We may see in the second half of the year a bit of a disconnect between what the sellers want, looking back six to 12 months, going, ‘These are the prices that hotels sold for back then,’ and it’s going to take a while for them to adjust to perhaps the new pricing structure,” he said.

Buyers are also using worries over a recession as part of their price negotiation strategy, Reay said. Sellers are looking ahead and, in some cases, selling hotels for less than what they originally paid for them because they’re worried about a longer recovery or selling later for less than they would now.

“As you start to see some of those assets trading like that, buyers are going to use that, they’ll use those as the new sales comps,” he said.