State hotel sales surge 157% through first half of year

State hotel sales surge 157% through first half of year 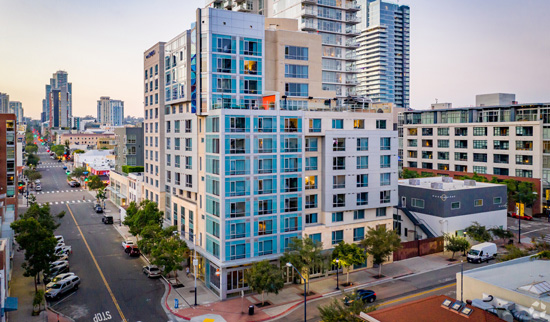 The $78 million sale of the 210-room Hotel Indigo in downtown San Diego was the most expensive transaction in the county during the first half of 2021. (Photo courtesy of CoStar)

Hotel sales in California are setting new records in term of price and transaction volume, according to a mid-year report from Atlas Hospitality Group.

“California hotel sales have completely rebounded from the COVID-impact that we saw through the first six month of 2020,” the report stated.

Atlas Hospitality Group found statewide hotel sales rose a record 157 percent through the first half of this year. The dollar volume for California’s hotel sales reached $5.2 billion during the first six months of 2021, marking a 450 percent increase, which is also a record for the state.

The median price per room climbed 13 percent year-over-year, according to the report. The sale of the 59-room Alila Ventana in Big Sur set a new record at more than $2.5 million per room.

Atlas Hospitality Group president Alan Reay said no one could have predicted such a turnaround, not to mention one that has happened in record time.

“I think the numbers are astounding,” he said. “People were talking like it would take until 2024 or 2025 to get back to normal, but what we’re seeing now wasn’t forecast.”

Reay said not only are travelers — tired of being cooped up — filling the hotels, there are a number of officials of opportunistic funds with lots of cash who are tired of sitting on the sidelines.

“It is as if COVID never happened,” he said. “We’re more than back to normal.”

Reay said he has noticed that many investors are betting on these hotels with no contingencies, and large, non-refundable deposits.

The other thing Reay has noticed is that room rates are hitting new highs as well — even in convention center hotels that were particularly slammed during the pandemic.

“People are wanting to get out, and the rates they are paying are really high,” he said.

Reay said even San Francisco, which was also hit particularly hard by the pandemic and the loss of its convention center business, has rebounded well.

“Two hotels in San Francisco sold for more than they would have in 2019,” he noted.

The county’s transaction dollar volume also experienced a dramatic year-over-year increase. The transaction volume climbed by more than 525 percent year-over-year to $621.9 million during the first six months of 2021, according to Atlas Hospitality.

The $78 million sale of the 210-room Hotel Indigo in downtown San Diego was the most expensive transaction here.

The number of rooms sold in San Diego County climbed 518.2 percent year-over-year to 3,567 rooms during the first half of this year, the report stated.

In other Southern California markets, the story is a similar one.

In Los Angeles County, transaction volume climbed 200 percent on an annual basis, while the dollar volume escalated by more than 600 percent during the same time period.

The report found the number of sales transactions rose 222 percent on an annual basis in Orange County and the year-over-year dollar volume escalated by 254 percent. The

The most expensive hotel sale in Orange County through June was the 174-room Element Hotel Anaheim Resort, which netted $64.68 million.

In Riverside County, the number of transactions increased by more than 53 percent year-over-year, while the dollar volume increased by 80 percent, Atlas Hospitality Group reported. The most expensive sale in Riverside was the 198-room Embassy Suites in Palm Desert.