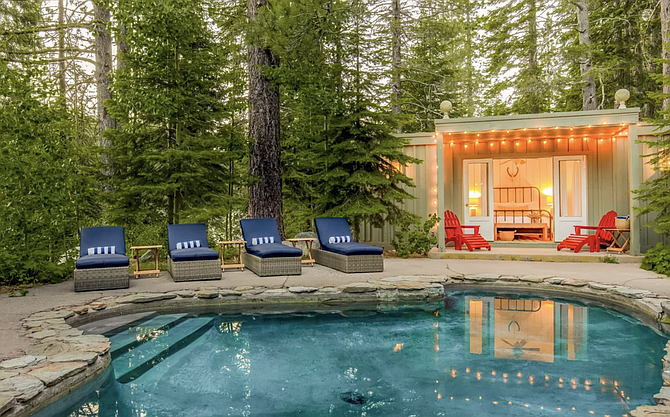 Despite tough regulations and a pandemic that pummeled the Los Angeles hospitality industry, local vacation rental operators are thriving.

Bookings with AvantStay, a short-term rental company that operates in 60 cities, including Malibu, are “really off the charts,” said co-founder Sean Breuner.

“We’re up three (times) year over year in terms of demand,” he said.

Many travelers shied away from hotels during the pandemic and instead escaped to short-term rentals, where they could hunker down and avoid crowds.

Now that large venues and attractions are reopening, and more Americans are rolling up their sleeves to get immunized against Covid-19, industry experts predict short-term rentals will continue to pose stiff competition for hotels.

In March 2020, at the start of pandemic shutdowns, occupancy levels at short-term rental properties were at 47.2%, compared with 58.2% the previous year, according to data from AirDNA, a group that tracks 10 million vacation rentals worldwide, including those listed on Airbnb Inc.

Those numbers ended up climbing during the pandemic, and occupancy in March jumped by 29.1% from March 2020 levels and by 4.6% from 2019 levels.

Higher occupancy as well as a demand for larger properties in destination areas increased average daily rates to $254.70 in March, an 18% uptick over March 2020 and up 19.2% from March 2019, according to AirDNA.

Short-term rentals are “definitely the desire right now. Especially post-pandemic and during the pandemic, that’s what everyone wanted is to stay at a home and have a kitchen and not go out,” said Sonnet Hui, vice president and general manager of downtown-based real estate advisory firm Project Management Advisors Inc.

During the pandemic, travelers have gravitated to short-term rentals because they are often larger, offer kitchens and living spaces, and don’t have lobbies and elevators with lots of foot traffic, said James Stockdale, executive vice president of Jones Lang LaSalle Inc.’s Hotels and Hospitality Group.

Alan Reay, president of Atlas Hospitality Group, said that while people concerned about cleaning protocols may prefer major hotel brands, many other travelers are sticking to short-term rentals, where a group can rent a home and have more space.
“It allows you to get away but not worry about restaurants being closed down, and you are able to cook at home and things like that,” he said.

Some short-term rental operators are now offering high-end amenities that are comparable to or even better than what’s available at ritzy hotels.

Nightfall Group, which has a $300 million real estate portfolio, including properties in Bel-Air, Malibu and the Hollywood Hills, offers high-end private car rentals, and private jet and yacht charters. The company will also book chefs and butlers, and set up spa services for its guests.

AvantStay uses a concierge services app and offers amenities that include private chefs and masseuses.

“The idea is to bring the hotel experience into the home and leverage the best of what the community can offer to elevate the experience,” Breuner said.

The short-term rental market in L.A. is not without its challenges.

In 2018, the city of Los Angeles joined other large cities around the world in regulating short-term rentals, requiring hosts to obtain permits and placing a cap on the number of days a year a property can be rented out.

Breuner, whose company is based in L.A., only has a small number of properties in the area, all in Malibu as a result. Malibu started requiring permits for short-term rentals earlier this year.

“L.A. still is a challenging regulatory environment,” he said, adding that AvantStay homes operate as full-time short-term rentals, not part-time ones allowed under L.A.’s regulations. Other cities have passed regulations in recent years for short-term rentals as well.

“Unfortunately, they make it very challenging to accommodate the demand for short-term rentals,” Breuner said.

Jabli added that the company had seen a lot of demand during the pandemic as people wanted to travel but stay in private accommodations.

JLL’s Stockdale said that worldwide, short-term rental bookings were down 30% in 2020 compared with 2019 while revenue per available room at hotels was down more than 47%.

In Los Angeles, hotels were forced to temporarily shut down due to local regulations. Some, including the iconic Standard on the Sunset Strip, even permanently shuttered.
“The short-term rentals performed a bit better,” Stockdale said.

Some of that comes down to the travelers they attract.

“Pre-Covid, the short-term rental phenomenon was very popular, not necessarily with a business traveler but with a leisure traveler. The segment that’s been least affected by the pandemic for travel is that leisure customer. People still want to get out,” Stockdale said.

Hui, with Project Management Advisors, said that before the pandemic, L.A. was adding more hotel rooms around the Convention Center downtown. But Covid-19 dealt a major blow to business and convention travel, and areas within driving distance that offered access to nature, like Palm Springs and Santa Barbara, were more desirable.

As a result of changing demand, Hui has even seen some projects that were entitled as hotels in L.A. change to residential or be used as short-term stay properties.
But Breuner said while a majority of AvantStay’s customers are leisure travelers, he is starting to see some business travel come back.

Companies like CorpHousing Group, a short-term housing company that leases to corporate travelers, didn’t fizzle out during the pandemic.

The company, which started about three years ago and is based in New York, operates in many cities including in Los Angeles, where it launched in June.

The company has around 70 units in L.A. and is looking to increase that number to 300 in the next year.

It plans to buy and lease high-end units, then lease or sublease them to corporate travelers with a 30-night minimum stay.

Justin Holcomb, a spokesperson with CorpHousing Group, said that during the pandemic he has seen a lot of demand and people extend their stays.

“It didn’t surprise us, but the numbers that we’re currently getting are validating everything that our leadership had foreseen,” he said.

He declined to share revenue numbers but said the company has “seen a major increase in that area.”

Hui added that the demand for short-term rentals during and post-pandemic from both leisure and other travelers are causing some brands to rethink their spaces and add things like family spaces and kitchenettes to their properties to be more competitive.
“People want a home away from home,” she said.

For reprint and licensing requests for this article, CLICK HERE.