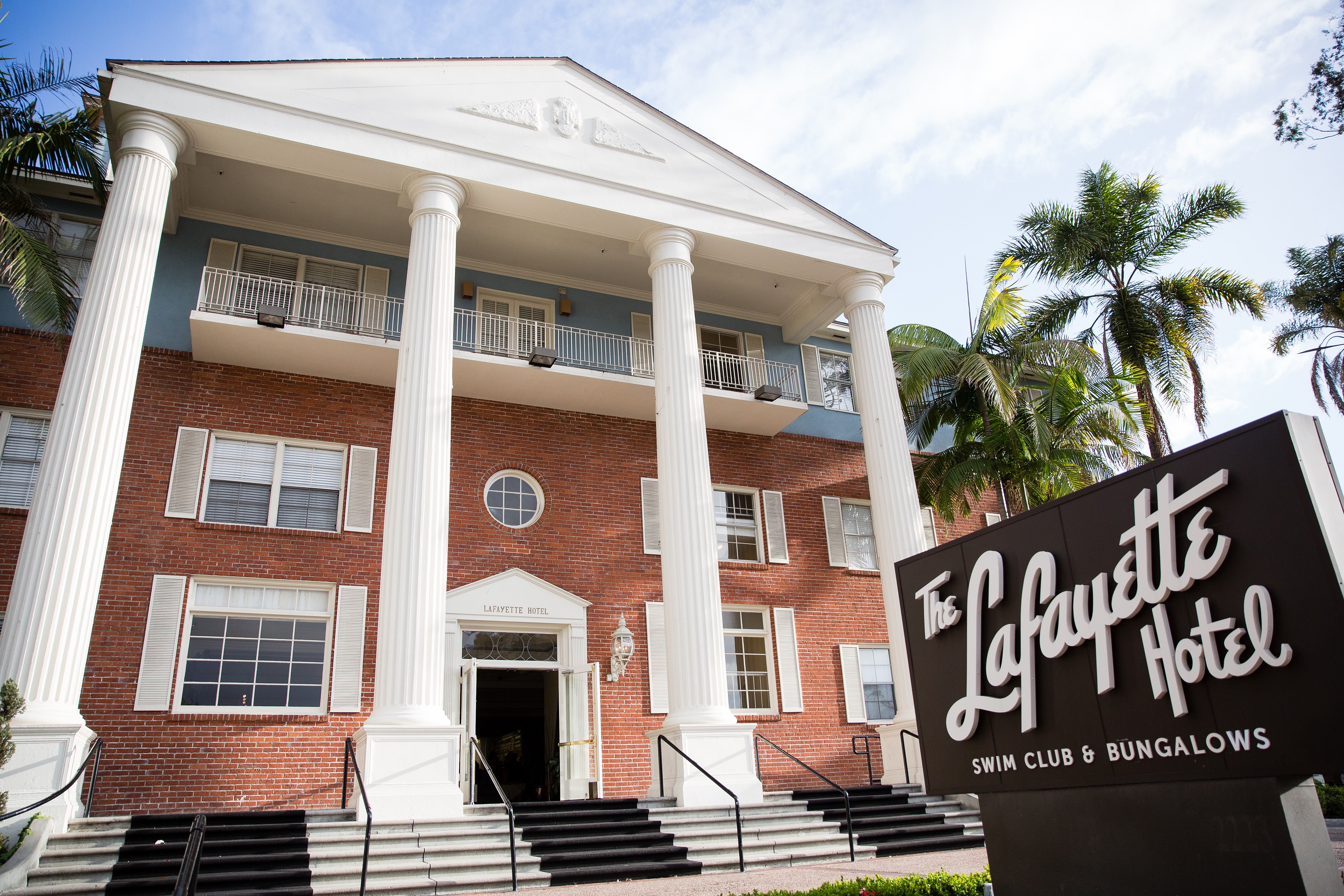 The historic Lafayette Hotel in San Diego, which attracted stars such as Bob Hope and Katharine Hepburn during its heyday in the 1940s and ’50s, has been sold to a restaurant operator that is venturing into the hotel business for the first time even as the pandemic wreaks havoc on that industry.

San Diego-based CH Projects, which operates several upscale, full-service restaurants in the region, purchased the 131-room property that was originally built in 1946 at 2223 El Cajon Blvd. in the city’s North Park neighborhood. The $25.8 million sale comes after what brokers said was “significant” interest from multiple potential investors despite the struggles of the greater hospitality business.

This is the first hotel purchase for CH Projects, which plans to restore and update rooms and add new food and beverage venues to the boutique property, according to a statement from brokerage Colliers International, which represented the seller, JCG Development of San Diego.

“The Lafayette Hotel has great potential given the period architecture, gracious common areas, beautiful pool and vibrant North Park location,” said Colliers broker Victor Krebs, referring to the enclave near Balboa Park that has garnered attention as a hip neighborhood home to younger residents as well as a slew of new bars and restaurants.

Even typically strong Southern California hotel markets such as San Diego and neighboring counties saw hotel occupancy and revenue plunge by half in 2020, and 2021 has been off to a rough start as the coronavirus outbreak wears on. Data from travel research firm STR, a CoStar Group company, shows San Diego’s January hotel occupancy was 34.7%, down nearly 51% from a year earlier, as total hotel revenue dropped 68% to $66.2 million.

The trends have significantly hit hotel sales in the region. California had 298 hotels change hands last year, slightly beating out 2019’s total of 297, though the dollar volume of 2020 deals declined more than 45% to $3.3 billion, according to brokerage and research firm Atlas Hospitality Group. That dollar volume topped totals for 2009 and 2010, which each saw less than $2 billion in sales, but was far below the peak $9.5 billion seen in 2015.

Despite all that, Krebs said the property generated “strong interest” from several investors. CH Projects did not immediately respond to requests from CoStar News for comment on its plans for the property.

CH Projects operates 16 restaurants in greater San Diego. The locations are often upscale and trendy in neighborhoods such as North Park and Little Italy, which tend to be more popular with locals than tourists. Among the restaurants is Born & Raised, which is a high-end steakhouse that was created in a former art supplies store space in Little Italy.

The Lafayette hotel’s website notes that the colonial-style Lafayette Hotel was built in 1946 by former car dealer and developer Larry Irving. It has since gone through several owners, including hotel magnate Conrad Hilton, who purchased the property in the late 1950s.

Its heyday lasted through the late 1950s, when its swim club and bungalows attracted getaway-seeking Hollywood celebrities that included singer Bing Crosby and actresses Ava Garder and Betty Grable. By the early 1960s, its luster had faded after construction of Interstate 8 redirected traffic away from the area.

The hotel remained popular with younger visitors and bands playing at the nearby Observatory music venue, which has been closed during the pandemic. The hotel has also hosted film and TV shoots over the years and was listed on the National Register of Historic Places in 2012.

The property is home to a restaurant dubbed Red Fox Room, described as a retro steakhouse, which is currently closed, as well as a cafe called Hope 46, which is operating for outdoor dining.

The property also offers nine event venues, including two ballrooms, a library, a conservatory and a board room. It last sold for roughly $10 million in April 2004, when JCG Development bought it, according to CoStar.