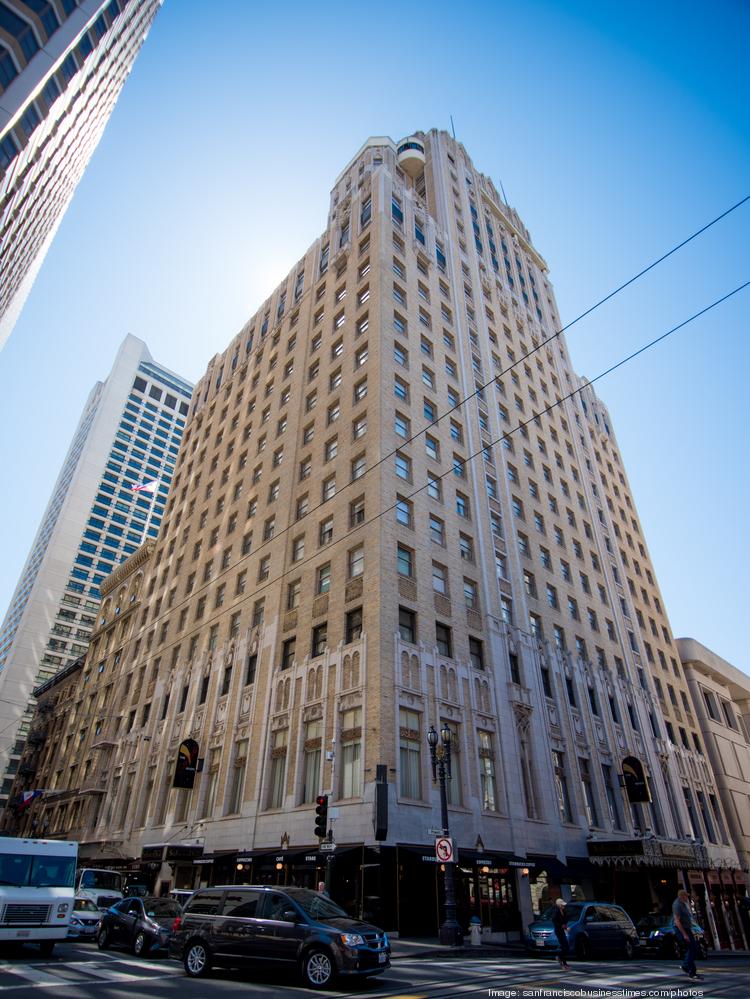 Pebblebrook Hotel Trust is in the midst of finalizing a deal to sell the Sir Francis Drake hotel in Union Square to a still-unnamed buyer for a sale price in the neighborhood of $160 million. TODD JOHNSON | SAN FRANCISCO BUSINESS TIMES

San Francisco has a new hotel comp — and it’s not necessarily great news for the industry.

The historic Sir Francis Drake hotel at Union Square is under contract to sell for $379,000 per room after closing costs, marking the first major hotel deal since the pandemic decimated the city’s convention and tourism industries.

Hotel experts I spoke to say the price for the 416-room property — a total $157.6 million before closing costs — represents a substantial drop from pre-Covid values.

Alan Reay, president of Atlas Hospitality Group, estimated the buyer scored a roughly 30% discount from the $225 million the hotel would have fetched in 2019, calling the sale “a fair price for both parties.” If it was sold last summer, before the rollout of coronavirus vaccines, the discount would have been steeper, at 50% to 60%, he said.

“It’s not something I would look at and go, ‘That’s an absolute wholesale price for the buyer,’ ” Reay said. “It’s still a risk because they’re looking at a huge amount of convention business that needs to come back to the city and a lot of fixed overhead with that hotel.”

Pebblebrook Hotel Trust, a publicly traded Maryland real estate investment trust, announced the property at 450 Powell St. was under contract Feb. 3 but did not disclose the buyer. The company expects the deal to close within 60 days.

Reay said the purchase indicates the buyer is bullish on travel recovering within the next 12 to 24 months, saying it makes the most sense for a company looking to break into the San Francisco market at a discount rather than those trying to expand their existing local footprint.

Speculation in the industry has focused on Northview Hotel Group, a Connecticut-based owner and operator of hotels, as the buyer, backed by Angelo Gordon. Pebblebrook (NYSE: PEB) declined to comment, and the privately held Northview, which does not own any properties in the Bay Area, did not return a message seeking comment.

Reay said the Sir Francis Drake could be the first of more divestitures for companies that own multiple hotels in the market and might be looking to limit their exposure in San Francisco, where occupancy and revenue per available room is not expected to hit pre-Covid levels until 2024 according to a projection from CBRE.

Pebblebrook owns 11 other hotels in the city, and all but two, including the Sir Francis Drake, remain closed due to the pandemic.

Gregory Miller, vice president of lodging and experiential leisure equity research at Truist Securities, said in a research memo that while the price per key falls amid the middle ground of Pebblebrook sales since 2018, he would have expected more attractive pricing in San Francisco, especially Union Square. The company’s average price per key for dispositions since 2018 is $410,000, he said.

He said the deal will help Pebblebrook with liquidity and reduce pressure to issue more debt or redraw from its credit facility.

When I asked Miller if the sale will set the tone for ownership groups in similar positions, Miller cautioned that it’s a “little too early” to say that, explaining, “You still can’t forecast out more than a month right now.”

“I suspect we won’t be seeing dispossession activity unless it becomes clear there’s not a mid-year recovery for Moscone Center conventions, or that international leisure travel won’t come back by next year,” Miller said.

By the end of 2021, however, it’s a “matter of time” before more deals materialize, potentially from private hotel owners with more challenged lending relationships than REITs like Pebblebrook, he added.

Jon Handlery, manager of the nearby Handlery Hotel at Union Square, said the price per key is “not a great number,” remarking that a $500,000 figure wouldn’t have been unheard of a few years ago when the market was on the upswing.

Handlery said local regulations on leisure stays put San Francisco hotels at a disadvantage — particularly the required 10-day minimum stay for guests from outside of the Bay Area, a commitment that isn’t imposed on leisure stays in Los Angeles and San Diego markets, for instance.

The 23-story Sir Francis Drake hotel, built in 1928 and known for its distinctive beefeater door attendants, has long appealed to upscale tourists with its proximity to cable cars and high-end retail and to conventioneers for citywide events.

Pebblebrook acquired the hotel in June 2010 for $90 million from The Chartres Lodging Group LLC. Kimpton Hotels & Restaurant Group is the manager. The company unveiled an $11 million renovation in July 2019; scroll through the slideshow below for photos.

Pebblebrook CEO Jon Bortz told me last year he would keep 10 of the company’s San Francisco hotels closed until the end of the first quarter or into the second quarter of 2021 until demand recovers more strongly, saying new local regulations requiring stringent cleaning add on to operating costs. Bortz also called the street conditions from homelessness and property crimes “untenable” and a serious concern for potential investors in the local hotel market.

At the two Pebblebrook hotels that have consistently remained open since the pandemic began, the Hotel Zetta in Mid-Market and Hotel Spero in the Tenderloin, room revenues were down 90% year-over-year through September and occupancy levels hovered around 15%.