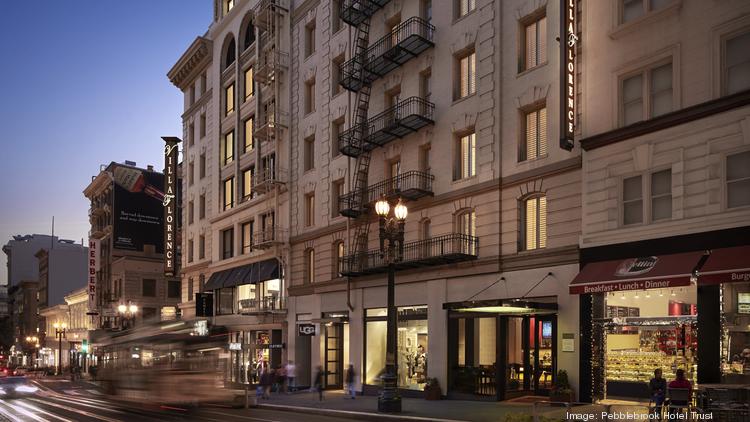 The transaction will mark the second hotel unloaded this year by the Maryland-based real estate investment trust; it sold the 416-room Kimpton Sir Francis Drake Hotel in Union Square in February to Northview Hotel Group of Connecticut. The latest sale will reduce its portfolio here to 10 properties.

Pebblebrook (NYSE: PEB) announced it was seeking a buyer in June. It expects the sale to close later this quarter.

The Villa Florence was scheduled for a $12 million renovation that was put on hold due to the pandemic. The project was part of $60 million in investment Pebblebrook CEO Jon Bortz had threatened to leave on the table last fall in response to, among other things, the Healthy Buildings Ordinance.

Pebblebrook acquired the Villa Florence, built in 1908 and located at 225 Powell St. near Union Square, in 2018 as part of its acquisition with LaSalle Hotel Properties, which had bought the hotel for $67.2 million in 2011.

The pending sale comes just a week after Park Hotels & Resorts (NYSE: PK), the city’s largest hotel property owner, announced the sale of two of its hotels — the 360-room Le Meridien San Francisco and the 171-room Hotel Adagio — in separate transactions to undisclosed buyers, for total proceeds of about $303.5 million, or $572,000 per key.

Alan Reay, president of hotel consultancy and brokerage Atlas Hospitality, said those prices were “as if Covid never happened,” saying they were what would have been expected for that kind of sale in 2018 or 2019. While urban markets face the steepest climb to recovery, the robust prices suggest strong faith in San Francisco rates bouncing back perhaps sooner than expected.

In the same release, Pebblebrook shared it had acquired the 200-room Jekyll Island Club Resort, located on Jekyll Island off the coast of Georgia, for $94 million.