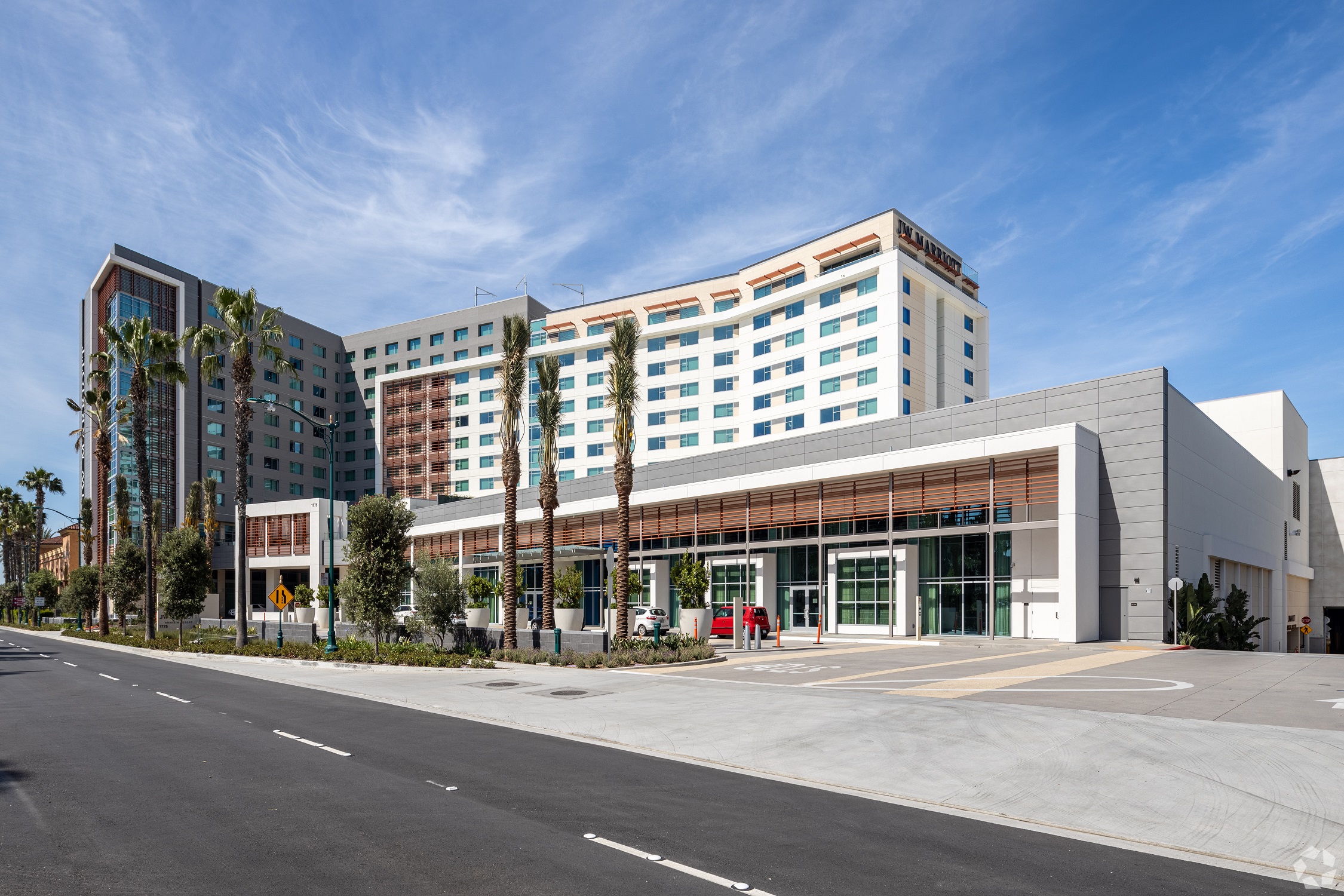 In a tough year for hotels, the largest new property to open in California during 2020 was the 466-room JW Marriott Anaheim Resort in Orange County. (CoStar)

An almost 30% year-over-year drop in new California hotel developments and openings last year could be a sign of what’s to come in a state where hospitality demand typically has been among the highest in the nation.

Many developers have put plans for new California projects on hold, and lenders remain wary amid the coronavirus pandemic’s devastating financial impacts.

Irvine-based brokerage and research firm Atlas Hospitality Group, in its latest annual California development report, predicted that “the vast majority of hotels in planning will simply not get built or will be deferred for a lengthy period” as a result of the COVID-19 pandemic.

The state’s hotel industry has been hammered since the pandemic brought global and domestic travel and conference business to a halt early last year. Data from travel research firm STR, a CoStar Group company, shows that pandemic-spurred plunges in occupancy rates, which shrunk by almost half from the prior year, caused total hotel revenue to drop 55% in Los Angeles County, 54% in San Diego County and nearly 60% in Orange County during 2020.

Atlas President Alan Reay told CoStar News that as a result of the tough year, some developers delayed openings of hotels that were completed or neared completion during 2020. “And a high number of projects in planning were either deferred or abandoned altogether,” he added.

California saw 66 new hotels open during 2020 with a combined 7,179 rooms, representing a 28.2% decline from the prior year for the number of properties that opened, Atlas said. California currently has a total of 23,451 rooms under construction, down from 28,102 at the end of 2019.

California’s hotel development pipeline has 1,245 properties with 165,685 rooms in various planning stages, actually representing a 3.7% increase from 2019 based on room count.

However, with hospitality business recovery not predicted any time in the near future, Reay noted many of those planned hotels may never get built or will face long delays until nationwide hotel fundamentals normalize or at least partially recover from the pandemic.

“The downward impact on hotel values combined with the lenders freezing hotel lending, especially on new construction, will continue to be a huge restraint on supply for at least the next three to five years,” the Atlas report said.

Reay said the planned California hotel projects with the highest prospects for getting built in the next three or four years include extended-stay properties and smaller boutique hotels in high-demand coastal and resort markets.

Those with the toughest road ahead for completion include convention center hotels and business-focused, full-service properties in urban centers, he said. Those types of properties are most dependent on a return to pre-pandemic business levels for corporate and other large group meetings, but remain among the most financially challenged in the current market.

Hotels depend on recovery in multiple industries such as leisure travel.

Atlas noted that the two largest California hotels to open during 2020 were in Anaheim in Orange County — the 466-room JW Marriott Anaheim Resort and the 326-room Radisson Blu Hotel. Both of those are located near Disneyland Resort, which has remained mostly shuttered since the start of the pandemic.

Los Angeles County currently has the most hotel rooms under construction at 7,148, followed by Santa Clara County at 2,428.