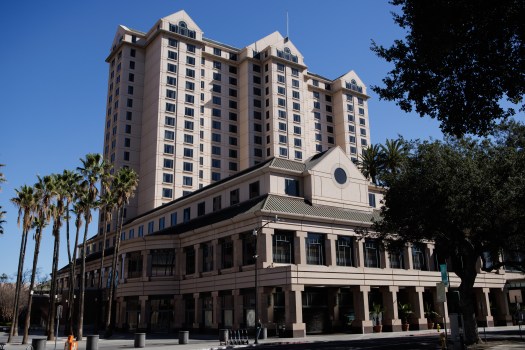 Signia by Hilton San Jose, February 2022. The reopening of a big hotel in downtown San Jose is now slated for late April, a hindrance that arose due to the nagging worldwide problems in the global supply chain.

SAN JOSE — The reopening of a big downtown San Jose hotel is now slated for late April, a delay of a few weeks triggered by nagging problems in the worldwide supply chain.

The Signia by Hilton San Jose hotel is now due to open during the final week of April at the site formerly occupied by the Fairmont San Jose hotel, according to separate comments from the hotel’s owner and the property’s manager and operator.

“April 25 is the date that the hotel is open for reservations,” a spokesperson for Signia by Hilton in San Jose said in an email to this news organization.

Some external factors delayed prior plans for the hotel to open on April 7, which was the previous estimate provided by the hotel’s ownership group.

“Shipping delays extended us for a couple of weeks,” said Sam Hirbod, principal owner of the property.

The current schedule for the hotel means the prominent double-tower lodging will finally reopen just over a year after it shut down.

In March 2021, the former Fairmont toppled into bankruptcy and closed its doors, saying that coronavirus-linked business shutdowns and travel restrictions had squeezed its finances.

An ownership group led by Hirbod used the bankruptcy to do more than reorganize and revamp the hotel’s crumbling finances. Hirbod was able to use the court proceeding to fashion a deal to oust Accor Management as the hotel’s operator.

That outcome enabled Hirbod to bring aboard Signia by Hilton as the new operator.

The 805-room hotel has two towers. The first guests will stay in the southern tower while the rooms in the northern tower are being fully renovated.

The northern tower will accommodate guests a few floors at a time as the renovations proceed.

Downtown San Jose is primarily a market for business travel and conventions, two sectors that were particularly devastated by the coronavirus pandemic.

The hotel’s performance at a time when the economy is beginning to reopen — and in a period of inflation and soaring gasoline prices — could be a key barometer for how well the lodging market is recovering in Silicon Valley.

The Signia by Hilton won’t necessarily attract booming business right away or even for the rest of this year, but a significant upswing is likely in the future, Alan Reay, president of Atlas Hospitality Group, said in March during an interview with this news organization.

“It will still be a little slow through 2022,” Reay said. “But the return to work and businesses getting back to meetings and conventions, combined with the Hilton affiliation, should bode very well for the new Signia.”

The new hotel, located near the downtown San Jose convention center, also intends to offer unique dining and drinking experiences that the owners hope will be a magnet for both out-of-town visitors and people who live in Silicon Valley and other parts of the Bay Area.