Not Just for Families, Anaheim’s New Hotels Will Try to Attract Adults and Upscale Crowd Amid Pandemic

Not Just for Families, Anaheim’s New Hotels Will Try to Attract Adults and Upscale Crowd Amid Pandemic 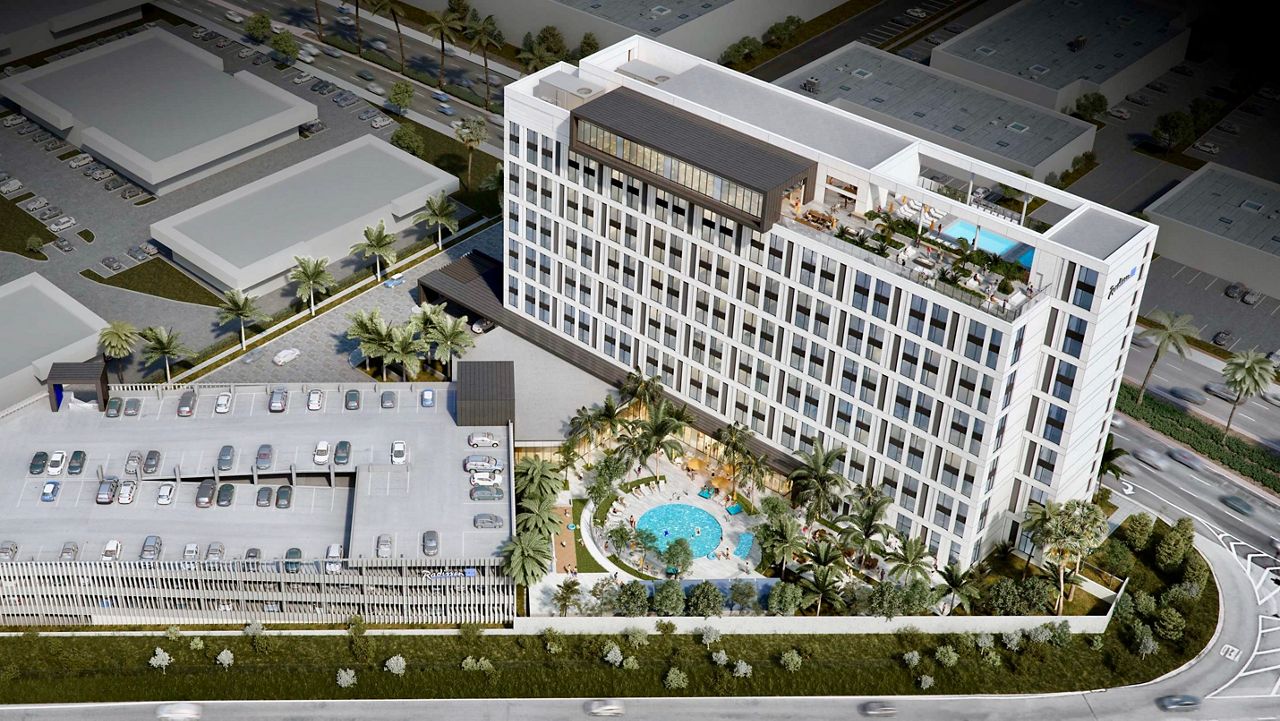 ANAHEIM, Calif. — The new Radisson Blu Anaheim has reserved the 12th floor of the hotel for adults.

The 12th floor will feature a rooftop pool and jacuzzi, a full-service restaurant with an exhibition kitchen, indoor and outdoor bars, fire pits, and a seating area where guests can see Disneyland and on a clear day the sun setting over the Pacific Ocean.

“We really think this is going to be a destination,” Radisson Blu Anaheim General Manager Steve Lindburg said of the hotel owned by BPM Real Estate Group. “We really envision this place, the 12th floor, as the area where couples or a business traveler looking for a quiet moment can just come up to the roof and enjoy themselves. Downstairs we have a kid’s area with an Oasis pool and splash pads.”

What You Need To Know

Less than a mile away, the new J.W. Marriott also features a rooftop bar with views of Disneyland and Catalina Island. The luxury hotel features a butterfly garden, a fitness center with Peloton bikes, and a Zen room that shows videos of yoga and meditation exercises.

With Disneyland Resort as the main tourist attraction in the city, Anaheim has long been known as a family-friendly destination, and many of the hotels in the city’s resort district have reflected that.

Most of the hotels in the resort offer themed rooms, playgrounds, arcades, and swimming pools with water slides to keep parents with kids occupied.

The new crop of luxury and upscale hotels with above $200 nightly rates and high-end amenities are opening to draw in the adults, business, and upscale crowd.

The 466-room J.W. Marriott opened in August. The 326-room Radisson Blu Anaheim on South Anaheim Boulevard will open in mid-November. In the coming months, the 618-room Westin Anaheim Resort will come to the market. The Marriott and Westin received tax incentives from the city to get built.

However, Reay said, it will be interesting to see how these new upscale luxury hotels will perform in Anaheim. Most four diamond luxury hotels in Orange County are built near the beach and along the coastline. Not many are built inland.

“Anaheim has not had any [non-Disney] hotels in the luxury segment prior to these three hotels,” Reay said. Only Disney’s Grand Californian Hotel and Spa and the Disneyland Hotel are four diamond properties.

“The main reason for this was first, the high cost of construction for [building] luxury products and secondly, this is an unknown market for Anaheim,” Reay said. “This has not been tested before. It remains to be seen how well the hotels will do targeting the upper end of the market.”

The new hotels come as the coronavirus pandemic has forced the closure of Anaheim’s main economic generators. With tourism restricted and Disneyland and the Anaheim Convention Center remaining closed, many of the city’s hotels have had to shutter or severely limit operations.

Before the pandemic hit in March, Anaheim attracted more than 23 million visitors and hosted more than 400 events at the Honda Center and the convention center each year.

In the week of October 4 – 10, the Anaheim/Santa Ana market had a 44.3 percent occupancy rate. Last year, occupancy for the comparable week was 85 percent, according to STR.

The city estimates hotel transient occupancy tax, which goes into the city’s general fund and pays for essential city services, has dropped 30 percent to $84 million from $120 million a year ago.

The American Hotel and Lodging Association sent out a statement that if Congress does not pass another round of aid, more than 3,800 hotels in the state could permanently close.

Despite the pandemic, the hotel business still is moving forward. The Radisson Blu, J.W. Marriott, and the Westin Anaheim Resort were all in development years before the pandemic hit.

“These processes were in play four and four and a half years ago,” Lindberg said. “Commitments have been made to get the hotel online. Now is the time to do it anyway. We want to turn this into an opportunity and get our staffed trained, and when things do get to normal, we’ll be ready for it.”

To adjust to the current pandemic situation and keep guests safe, Lindberg said, the Radisson Blu will only make available half of its 326 rooms.

The hotel’s HVAC system has been upgraded with MERV 13 filters – the type of air quality found in hospitals.

Plexiglass screens have been installed in the front lobby counter, Lindberg said. There are hand sanitizers in the lobby, masks are required for staff and guests, and the hotel is implementing a daily deep cleaning process.

The hotel is also operating with a small staff and will hire additional employees as demand grows, he said.

Mirza, the general manager at J.W. Marriott, said they have also adopted several health and safety features at the resort.

Guests are required to wear masks and have their temperature checked. The pool will have limited capacity. The lounge chairs are spread six feet apart. Guests will access their rooms and menus of the hotel’s restaurant with their mobile phones.

There is even a dedicated “cleaning champion” on staff.

Service and providing a guest experience will continue to remain paramount, Mirza said.

“Hospitality is supposed to be friendly,” Mirza said. “Even though we have to wear face masks, we’ve taught all of our staff to smile with their eyes.”

With the pandemic still going on, Disneyland and the convention center closed and the placement of these luxury products in a new but untested market, the road for these hotels is tough.

But Lindberg and Mirza said they expect better days ahead. The pandemic is not going to go on forever. Anaheim’s economic engines will open again sometime in the future.

Mirza said he’s already seen an uptick of guests checking in to the J.W. because people are sick of staying home. There is going to be a lot of pent-up demand, he said.

“Once Disneyland and the convention center reopens, everything will be better,” Mirza said.