No room at the inn?

No room at the inn? 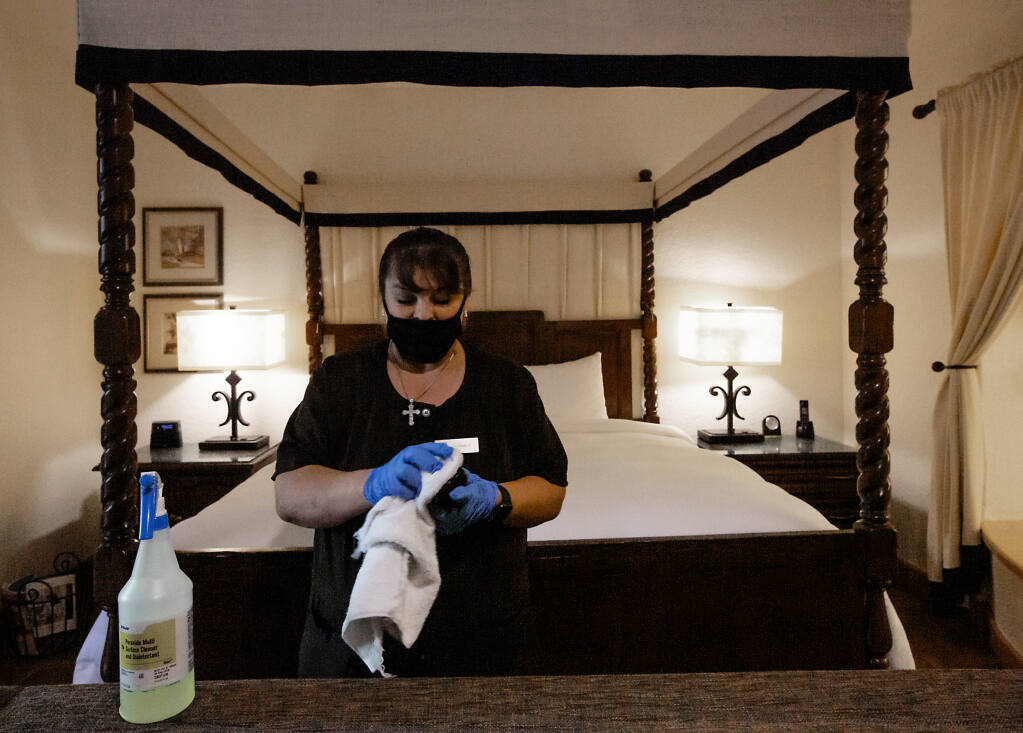 With many guests coming through, housekeeper Maria del Carmen Rodriguez is kept busy cleaning and disinfecting a suite at the Fairmont Sonoma Mission Inn in Boyes Hot Springs on Friday, August 13, 2021. (Photo by Robbi Pengelly/Index-Tribune)

It’s not your imagination. Downtown Sonoma is chock-a-block with tourists. Local hotels are boasting 80-to-100% occupancy rates.

“The past few months have been some of the best in the MacArthur Place’s 20-year history with record average daily rates and record-breaking occupancies consistently over 80%,” said Chad Parson, CEO of Lat33 Capital (formerly IMH Financial), which has owned MacArthur Place since 2017.

Across town at El Pueblo Inn, General Manager Aranda Tines told the Index-Tribune the hotel has been booked solid since June, including most weekdays — something the staff there can’t remember ever experiencing before.

Up Highway 12, Michele Heston of the Fairmont Sonoma Mission Inn described occupancy levels as “very strong (mirroring 2019 levels) due in part to a recent resurgence in weddings and family reunions.”

Local hoteliers are counting their blessings, but they know their good fortune could change overnight. Increased COVID restrictions, wildfires, smoky air — they have been through it all before.

“One thing these past three years have taught me in Sonoma Valley is that the universe likes to throw us curveballs — the fires, smoke, (Public Safety Power Shutoffs), and pandemic and economic issues have really changed a lot of patterns,” said Tim Zahner, director of the Sonoma Valley Visitors Bureau.

More than 200 new hotel rooms proposed for the Valley

In Sonoma, Marin, Napa and Solano counties, 83 hotels are in various planning stages, according to data compiled by Atlas Hospitality Group. That includes five projects with 537 rooms under construction in the North Bay.

Atlas President Alan X. Reay told the North Bay Business Journal in July then there are several factors behind the spike in future hotel planning activity.

“California hotels are enjoying record profits along with record revenues,” he said. “In addition, the trend by those buying existing hotels has pushed prices up to the point where it often makes more sense to build a new one. This growth is poised to occur despite increasing construction, labor and materials costs, as well as higher tariffs on furniture made in China favored by hoteliers.”

But a major new hotel hasn’t opened in Sonoma Valley in decades. And the only new hotel to open in the past five years was Michael Marino’s eight-unit Sonoma Bungalows on West Napa Street, which began greeting guests in early 2020.

“There’s currently a lot of demand and not a lot of supply of rooms,” said Zahner. “But it’s hard to say if we have too few or too many hotel rooms since that’s decided by the people willing to take the risk to open one, but I am confident we could comfortably fill some more.”

Three major local projects are in various stages of the approval process, with the newest currently closest to the finish line.

The use permit for a 120-room hotel and affordable housing project at the former Paul’s Resort site across from Maxwell Park gained unanimous approval from the Sonoma County Planning Commission on July 15. The applicant, the Springs Investors Group, is a limited partnership led by local Best Western hotelier Norman Krug, 83.

The new three-story hotel would be 92,411 square feet and include a swimming pool, gym, meeting rooms, roof deck and 138 parking spaces. Construction could start on the project by late 2021.

Darius Anderson of Kenwood Investments (and managing partner of Sonoma Media Investments, owner of the Index-Tribune), meanwhile, first proposed his Hotel Sonoma Project in 2012. On hold since 2019, the project returned to the city’s Planning Commission on Aug. 12.

Anderson’s 62-room hotel and 80-seat restaurant proposed on West Napa Street, a half block from the Plaza, came before planning commissioners as part of a project study and scoping session, in an early-stage review of the latest incarnation of the hotel proposal.

Up Valley in Kenwood, the Yuciapa Companies, a Los Angeles-based private equity firm founded by billionaire Ron Burkle, has purchased 358 acres in Kenwood with plans to develop a resort at the base of Hood Mountain. The property, formerly owned by the Chinese developer Tohigh Property Investment, gained county approval for a 50-room hotel, spa and restaurant back in 2017 but has been dormant ever since.

If you built it, will they come?

Destination Analysts, a San Francisco-based market research firm, surveyed more than 1,200 American travelers in late July about their thoughts, feelings, perceptions and behaviors surrounding travel in the wake of the pandemic. The survey found an increase in the number of people stating they feel unsafe, nervous, worried or anxious about traveling.

It found that 43% of American travelers expect the pandemic will worsen in the next month. That’s up from 19.6% the week of July 12.

Hoteliers contacted by the Index-Tribune noted that weekend bookings are surpassing pre-pandemic levels but that weekday stays and “corporate meeting” demand is still softer than pre-pandemic.

“Being closed for most of 2020 meant that the last 16 months have been a struggle for us and others who stayed closed, I am sure,” said Tim Farfan of Sonoma Hotel on West Spain Steet. “Since California fully opened in mid-June 2021, we have seen a strong increase in occupancy. For June and July 2021 we were about 5% below 2019 occupancy, so not too bad. Looking into the fall, I would expect this trend to continue as long as there is not another shutdown or local fires.”

“While certainly affected by the pent-up demand from 2020, we’re seeing additional interest in outdoor activities, festive venues and social gatherings that bring people together in fun ways – all things that Sonoma Valley can offer at a world-class caliber.”

Bodenhamer believes Sonoma will continue to be a compelling destination because of the “authenticity” of the wine region and the fact that it’s ”a real working agricultural community.”

“More and more travelers are seeking that kind of experience,” he said. “That desirability, the recent population migration trends and major investments and service upgrades at Santa Rosa airport are likely to continue fueling demand here for years to come.”

Bodenhamer also noted that in recent years the Sonoma “season” has lengthened far beyond just the summer months.

“We are fortunate in that our hospitality season is nearly year-round (now). Food and wine tourism mirrors the harvest cycle but as more people learn about the outdoor activities and amazing arts programming in Sonoma, we will continue to round out the visitor ‘season,’ which is great for businesses and residents,” he said.

Zahner worries that if more hotels room don’t get approved, visitors may either go look farther afield, taking their money for restaurants and retail and attractions elsewhere; or that resident may be tempted to skirt rules on vacation rentals and try to capitalize off renting out their houses or rooms.

“And they don’t always do this in line with the same rules that hotels have to follow,” he said.

Whether locals embrace or are annoyed by tourism, the dollars generated positively impact the City’s bottom line. 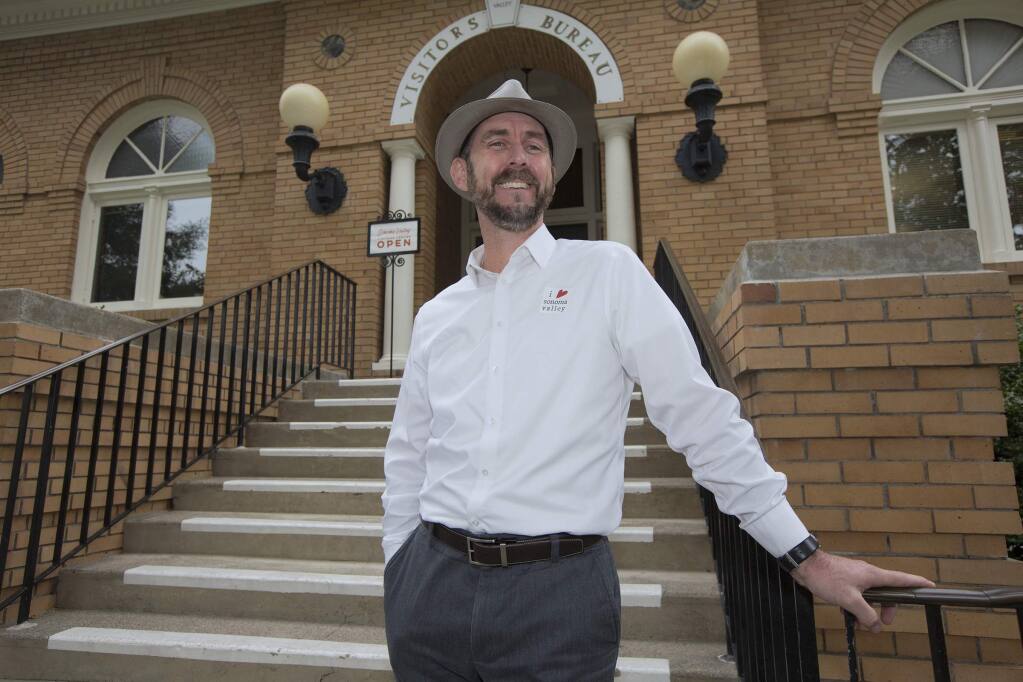 For every $100 a hotel charges in room rate, another $12 is collected in the city’s general fund for things like parks, public safety and services. Another $1 goes to the affordable housing fund, for a total of 13% transient occupancy tax (TOT), according to Zahner. City of Sonoma staff did not respond to a request for more specific recent TOT data.

“It’s important for Sonoma to continue to grow and evolve as a tourism destination,” Bodenhamer said. “Having more hotel options that cater to a various demographics and serve different parts of the Valley is a great thing for our local economy.”

Zahner is unfazed by the challenges thrown his way by wildfires, the pandemic or a tight job market. It’s his job to maximize tourism for Sonoma Valley.

“I hear it from my parents and my in-laws that they have a hard time finding rooms when they want to visit,” said Zahner. “I tell humbly them it’s because I’m good at my job.”