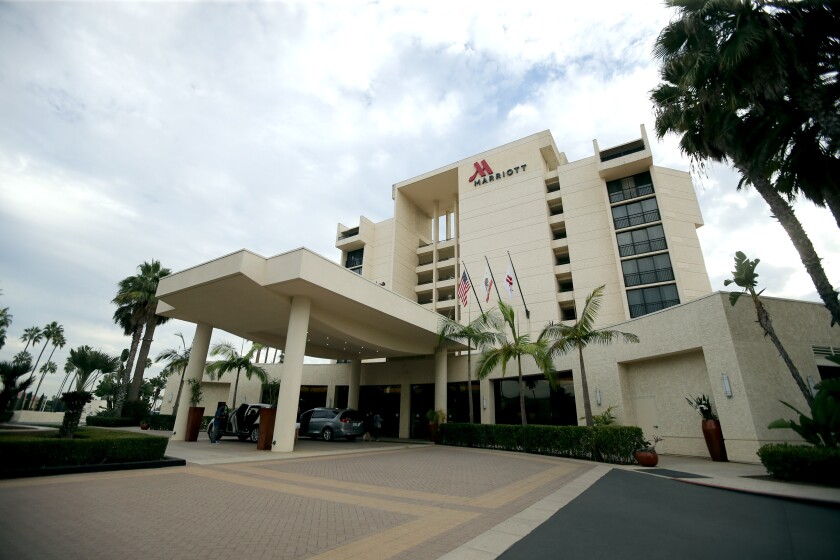 The Newport Beach Marriott Hotel & Spa has been sold for $216 million, it was announced Wednesday. (Raul Roa / Staff Photographer)

The hotel, which is on Newport Center Drive, was purchased by Lyon Living, a property management company in Newport, and Eagle Four Partners, a private equity firm based in Newport Beach that owns the Pasea Hotel and Spa in Huntington Beach, the Balboa Bay Resort and the Newport Beach Country Club in Newport Beach. Host Hotels and Resorts said in a news release that the sale was made “subsequent” to the end of the third quarter of this year.

“As local owners and operators, we are thrilled to be acquiring the Newport Beach Marriott Hotel and Spa and adding it to our portfolio of iconic hospitality and lifestyle residential assets,” Kory Kramer, a partner at Eagle Four Partners, said in a statement.

“Being an integral part of the community fabric of Newport Beach, we are dedicated to a transformative renovation in 2021 bringing the hotel to a new level of guest experience and service befitting its location in the heart of Newport Beach,” Kramer said.

Peter Zak, president and partner of Lyon Living Development Company, said the hotel will complete a comprehensive renovation and that the results will add value not only to the hotel, but to the surrounding neighborhood.

“Newport Beach is our home. We are proud owners of the Balboa Bay Resort and Club and Newport Beach Country Club. Partnering with Newport Beach-based Lyon Living, we believe our group will transform the Newport Beach Marriott Hotel and Spa into a preeminent community asset for future generations,” said Kevin Martin, a partner at Eagle Four Partners.

Data from Host Hotels and Resorts estimates the hotel pulled in about $15.7 million in revenue for owners. Average room rates were $203 when the hotel was at an occupancy rate of about 78.9%.

Alan Reay, a hotel real estate analyst and president of the Atlas Hospitality Group, a real estate firm that focuses on the sale of hotels, said it was the highest sales price in California of a hotel property in 2020.

Reay said the $216-million price tag, however, is lower than he believes it would have been in a normal year.

Reay said the hotel sold at about $406,000 per room, but less per room than was the case in the sale of the Monarch Beach Resort Hotel in Dana Point in 2019. That hotel sold for about $497 million, averaging at a cost of about $1.24 million per room.

Reay said hotels trade based off current revenue numbers and operating incomes, but that the impact of the pandemic on the tourism sector makes it difficult to value hotels based on the current financial situations at properties.

“People are really looking at what the hotel generated in 2019 and then factoring how long it’s going to take before they get back to 2019 kind of revenue numbers and buyers typically will build that into a reserve and take it off the price,” Reay said.

The Atlas Hospitality Group said the second-highest sale this year was of the Hilton in downtown San Jose for $117 million in January. The third-highest sale was the Viceroy L’Ermitage Beverly Hills for $100 million in August.