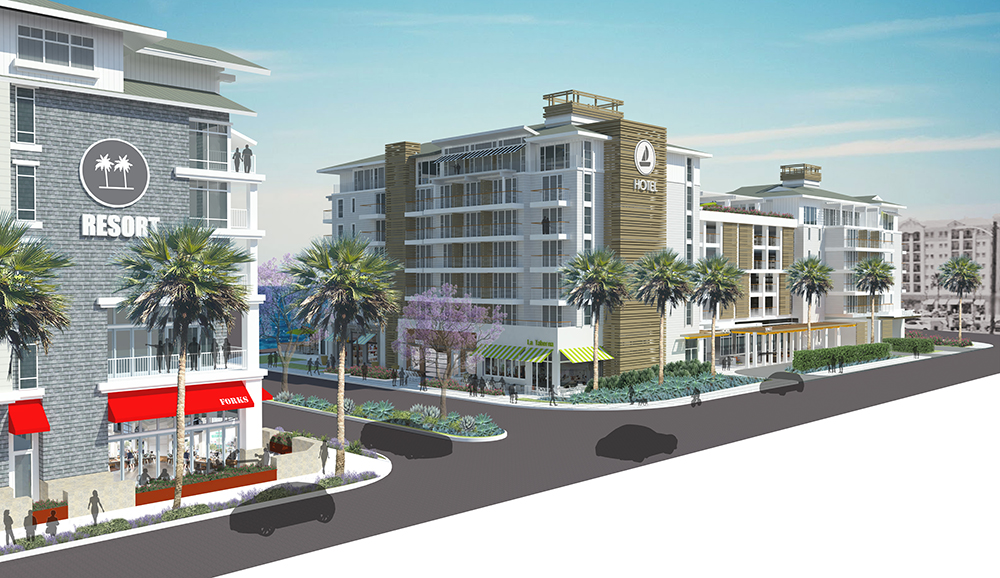 The 387-room, two-hotel complex in Oceanside, California, is the largest in the San Diego region to be built directly on the Pacific Ocean in several decades. (S.D. Malkin Properties)

Developer S.D. Malkin plans a spring 2021 opening for what is being billed as the San Diego region’s largest oceanfront hotel project in more than a century, a project aimed at attracting tourist interest for a vintage house used in the filming of the 1980s movie “Top Gun.”

The two-hotel complex in downtown Oceanside, California, is designed to total 387 rooms in the new Mission Pacific Hotel and Seabird Resort. The project sits on the site of the Victorian-style Oceanside beachfront house, originally built in 1887, where stars Tom Cruise and Kelly McGillis filmed several interior and exterior scenes in the hit fighter pilot film.

The hotel development required the relocation of the vintage house to a spot in between the two new buildings.

Despite a brutal pandemic climate for U.S. hotels, developers and operators of the planned beachfront complex are counting on that Hollywood connection and continued regional drive-in leisure traffic to boost prospects.

“We have a very strong ‘drive to’ market, running from Los Angeles to Phoenix, and we think that will remain strong in this coming year,” S.D. Malkin principal and Director Jeremy Cohen told CoStar News.

The hotels’ pending arrival comes in a challenging time for hospitality properties in tourism-reliant cities. Mirroring much of Southern California, the San Diego region’s hotel occupancy was 50.3% for the first eight months of 2020, down 36.4% from the same time a year earlier, according to the latest data from travel research firm STR, a CoStar Group company.

The $180 million development has been in planning for more than a decade in Oceanside, the San Diego region’s third most populous city and the northernmost of five North County beach cities.

The region has several larger hotels located on San Diego Bay, but Cohen noted the Oceanside complex, spanning 700 feet of beachfront property, is the largest in the area to be built directly on the Pacific Ocean since the 1888 opening of the historic, 757-room Hotel del Coronado, in the South Bay area.

Cohen said exterior renovations of the relocated vintage house are nearly completed as part of a $1 million restoration, and interiors are also being refurbished so the house can serve retail or other commercial purposes while retaining its movie connections and historic elements.

San Diego’s large presence of military air bases led producers of the 1986 film “Top Gun” to film in several locations in the region.

If the timing comes through, the Oceanside hotel complex could get renewed attention with Paramount Pictures’ planned July 2021 release of the twice-delayed sequel “Top Gun: Maverick.”

“It is an added feature, and I think it should play well and add a new component and attraction for staying here,” Alan Reay, president of hotel brokerage and research firm Atlas Hospitality Group told CoStar News.

Carl Winston, director of the Payne School of Hospitality & Tourism at San Diego State University, said hotels can use any edge they can get in the current nationwide climate of suppressed travel, especially for corporate and group business.

He said most of the nation’s hotels that are operating with any degree of success are those located close to major freeways, and also those in unique settings like beachfronts and mountain resort areas.

With its beachside location and upscale elements not seen previously in the generally overlooked Oceanside, Winston said the “Top Gun” factor could help the new hotels stand out, along the lines of two Lego-themed hotels built at Legoland California Resort in Carlsbad and two San Diego conversions planned by other hotel operators next year to Jimmy Buffett’s “Margaritaville” brand.

“The conventional and unconventional wisdom, from what I’m hearing out there, is that what we’re seeing now is going to be the norm for the hotel industry for a long time to come,” Winston told CoStar News, noting it may be 2022 at the earliest before hotels nationwide can see a climate resembling pre-pandemic normal.

“A number of hotels are already delaying opening until spring of next year, so they hopefully will benefit from a decline in COVID-19, lifting of restrictions and possible vaccination discovery, and then the uptick with summer business,” said Reay. “The beach location and drive-to market are both really big positive factors.”

It is also a chance for Oceanside to get its own share of a hospitality market that has long seen North County visitors head primarily to hotels in neighboring Carlsbad.

Oceanside for decades has been a key business and residential hub, particularly for workers and military families affiliated with the nearby Marine Corps Base Camp Pendleton.

However, it did not see significant tourist-oriented hotel development until its downtown underwent significant renovation over the past five years, bringing in multiple new elements attracting locals and creating new tourism demand prior to the pandemic.

“Oceanside has been on fire with new cafes and restaurants and microbreweries,” Cohen said. “I think its time has come in terms of being recognized as a very unique California coastal city.”