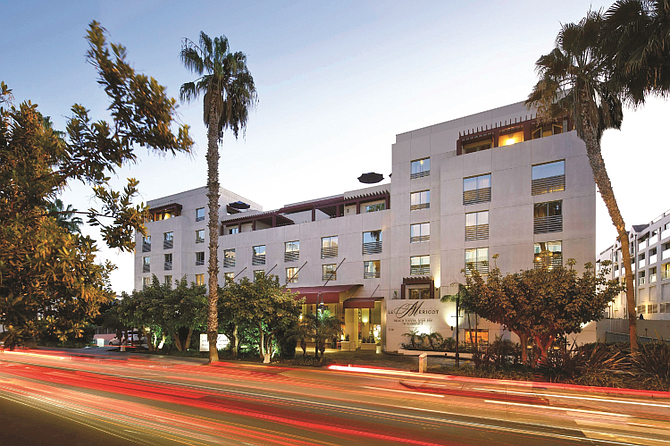 JW Marriott Le Merigot Santa Monica tied as the top sale in the first half of 2021 at $75 million.

Hotel sales are hitting record highs, surpassing not only 2020 but 2019 levels as real estate investors who waited out early waves of the pandemic finally look to spend.

“It’s pretty amazing. I don’t think anyone could have predicted or forecasted that this was going to happen,” said Alan Reay, president of Atlas Hospitality. “To see this incredible rebound — not only prices but also the number of transactions — is really astounding.”

Los Angeles is outpacing the rest of the state, even as California sets new records.
In the first half of the year, hotel sales were up 156% in the Golden State — a new record, according to Atlas Hospitality.

“It surpasses anything we’ve seen in our mid-year survey going back 20 years,” Reay said of the 2021 data.

There are a few reasons for the spending spree, according to Reay.
During the pandemic, many companies raised money in anticipation of distressed hotel sales coming to the market, but “that never materialized, and so those companies have been sitting on a lot of cash and have to put it to work,” Reay said.

“On the investment side, early on in the pandemic we thought there was going to be a lot of distress and distress coming in the form of foreclosures. Then, we saw lenders give time to hotel owners to figure this out. That, coupled with government stimuluses … that really helped save our industry,” he said. “All this money was raised to go out and find distressed opportunities, and the distress never happened.”

Reay added that while the median sales price per room was up, it’s still below the price of building a new hotel, which costs more than $200,000 a room.

“A lot of people are looking at California and saying, ‘I can still buy below replacement cost, and that gives me protection,’” Reay said.

There have been two especially pricey sales in L.A. so far this year: the Hyatt Regency LAX and the JW Marriott Le Merigot Santa Monica. The two properties are tied for the most expensive sale of 2021 at $75 million each.

Westwood-based Stockdale Capital Partners closed its purchase of the JW Marriott Santa Monica Le Merigot hotel in May. It purchased the property from Columbia Sussex Corp.

The 175-room hotel sits at 1740 Ocean Ave. It is one of only four beachfront hotels in Santa Monica, according to Stockdale Capital.

The Hyatt Regency, at 6225 W. Century Blvd., has 508 rooms. The Southwest Carpenters Trust Fund purchased the property from Amalgamated Bank.

Looking ahead, Reay expects continued interest in L.A. hotels, especially as meetings and conventions come back to the downtown area, and international travel increases demand in Hollywood.

“The coastal markets, they are all not just doing very, very well, we are seeing them put up some historically high numbers,” he said.

DiPrima added that drive-to destinations with large amounts of leisure travel and premium select-service hotels are seeing the most demand. Large hotels near convention centers, meanwhile, have not.

“There are two types of properties that are getting the most attention from investors … first it’s the drive-to leisure resorts, especially assets along the coast next to large population centers. Those have gotten a lot of interest from investors,” said James Stockdale, an executive vice president at Jones Lang LaSalle Inc. “Leisure travel has been the least affected by the pandemic. … The new builds (built) within the last five, seven, 10 years, select service and extended-stay assets have been highly coveted by investors. They are very low-cost operating models.”

Stockdale added that he expects to see more sales the second half of this year compared with last year.