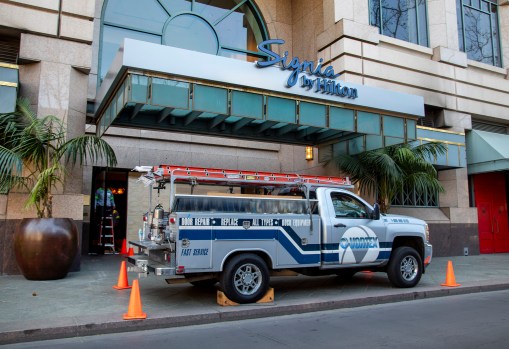 Workers install a doorway on the Signia by Hilton hotel at 170 S. Market St. in downtown San Jose. A burst of hotel openings in Santa Clara County and downtown Oakland points to widening confidence that the Bay Area lodging market is beginning to cast off its coronavirus-linked ailments. (Karl Mondon/Bay Area News Group)

SAN JOSE — A burst of hotel openings in Santa Clara County and the East Bay points to widening confidence that the Bay Area lodging market is beginning to shake off its coronavirus-linked ailments.

Six hotels have either opened or are close to opening their doors in downtown San Jose, downtown Oakland, Sunnyvale and Milpitas, raising hopes of a turnaround in the regional lodging sector.

Still, while a recovery might be in the cards for the hotel markets in the Bay Area, the lodging industry won’t get back to full strength right away, cautioned Alan Reay, president of Atlas Hospitality Group.

“In the long term, as offices start getting back to normal, business will pick up, but this will not happen overnight,” Reay said.

Here are hotels involved in the current burst of openings:

— Signia by Hilton San Jose, an 805-room double-tower hotel in downtown San Jose that had closed amid bankruptcy and coronavirus-linked difficulties, is slated to open in early April. For decades, the hotel, at 170 S. Market St., was a Fairmont hotel but is reopening under the Signia Hilton brand.

These six hotels together account for just under 1,800 rooms. Of these, more than 1,300 rooms are opening in Santa Clara County.

“Silicon Valley has historically been one of the strongest hotel markets in California,” Reay said. “The impact of COVID combined with the influx of significant new hotel supply has had a dampening effect on the market performance.”

The South Bay region traditionally has been a midweek hotel market that relies heavily on business travel and corporate meetings.

Business travel virtually evaporated during the period of coronavirus-linked business shutdowns and restrictions.

Revenue per available room plummeted by at least 85% in Santa Clara County during 2020 amid the coronavirus-triggered closures, according to Reay.

That kind of business activity will have to reappear for these hotels to succeed.

It could take until 2024 or 2025 for Santa Clara County to return to its pre-COVID hotel occupancy levels and average room rates, Reay said.

“Hotel owners and developers will need to make sure they have the reserves to cover the ramp-up period,” Reay said. “Long-term, the market will be positive.”

As the city’s urban core emerges from the economic rubble that the coronavirus unleashed, the San Jose Downtown Association is attempting to bolster downtown San Jose businesses on a wide scale, said Scott Knies, the organization’s executive director.

“We need everybody,” Knies said. “We need local business and we need tourists. We are trying to promote all of our assets in downtown San Jose to everyone.”