Fairmont was nearly empty during worst of the coronavirus outbreak: court papers 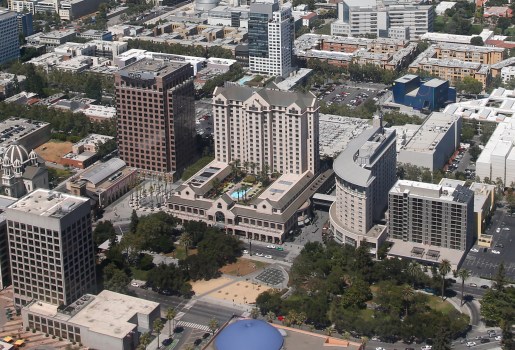 Fairmont San Jose hotel in the city’s downtown, with the main hotel in the center, and the tower annex to the right. The Fairmont San Jose owners appear to be seeking a swift endgame for the iconic hotel’s bankruptcy case and have filed the first version of a formal plan to reorganize the property’s wobbly finances.

SAN JOSE — The Fairmont San Jose owners have sketched out a swift endgame for the iconic hotel’s bankruptcy case in the first version of a formal plan to reorganize the property’s wobbly finances, court papers show.

Newly filed court papers in the case point to the completion of the court case about four months after the Chapter 11 bankruptcy filing on March 5. That sort of schedule could conclude the bankruptcy case by sometime in July.

Under the U.S. Bankruptcy Code, debtors have the exclusive right to file a plan of reorganization for at least the first 120 days, or four months, after a bankruptcy has been filed. Some debtors take more than two months, said Sam Singer, a spokesperson for principal hotel owner San Ramon-based Eagle Canyon Capital, whose president is Bay Area business executive Sam Hirbod.

The primary creditor in the bankruptcy is CLNC Mortgage Sub-REIT, a unit of real estate financing and investment firm Colony Capital. The Colony Capital affiliate is the holder of a $173.5 million mortgage for the hotel property.

Bolstering the hotel owner’s quest to emerge from bankruptcy, Colony Capital has agreed to cooperate with the debtor in the reorganization effort. Colony won’t launch a foreclosure on the mortgage and a seizure of the hotel property, according to the bankruptcy records.

“We are on track with our milestones under our agreement with Colony Capital, which moves us substantially along the path of exiting Chapter 11 as scheduled in the next few months,” Singer said.

Still, plenty of crucial hurdles will have to be cleared by the hotel owners to successfully reorganize the hotel’s finances.

Among the important challenges that face the bankrupt hotel owner:

— The owners must successfully find a new and high-profile hotel manager that will operate the downtown San Jose hotel under a new brand.

— The new hotel operator must agree to provide at least $45 million in a cash infusion to help steady the hotel’s finances.

— The hotel owners must get court approval to terminate the existing hotel management and operating contract with Accor Management U.S., which formerly was Fairmont Hotel & Resorts.

It also became clear that the bankrupt hotel owner, Eagle Canyon; and the hotel operator, Accor Management, became adversaries over a one-year period starting in March 2020, which is around the time that the coronavirus jolted the finances of the Fairmont and hotels worldwide.

Accor Management accused hotel owner Eagle Canyon Capital of not providing enough financial support to the hotel operators until revenue and occupancy levels could return to the pre-COVID levels.

“This stance led to a number of disputes,” Paul Tormey, an Accor regional vice president, declared in a statement to the bankruptcy court.

The Fairmont San Jose closed its doors on March 5, although it hopes to be open again by sometime in May or June. The last day of hotel operations led to further complications, court papers show.

“That afternoon, in violation of the hotel management agreement, the debtors physically removed Accor management from the hotel property,” according to the bankruptcy records.

What isn’t in dispute is the hotel’s revenue and occupancy levels nosedived last spring as the coronavirus raged on.

“That’s as close to zero occupancy as you can get,” said Alan Reay, president of Atlas Hospitality Group, which tracks the California lodging market. “For all intents and purposes, the Fairmont was empty during that time.”

The nationwide hotel market might not rebound to the pre-coronavirus levels until 2022, according to bankruptcy court documents that cited a Costar report.

Even that timeline might be too optimistic for the battered hotel industry.