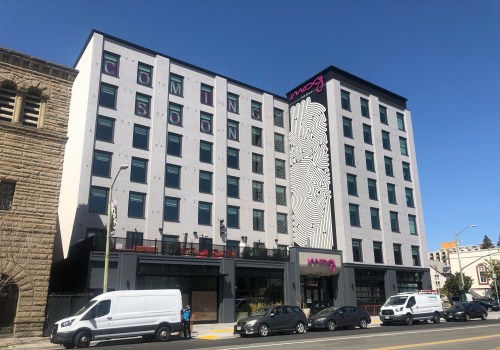 OAKLAND — Downtown Oakland’s bustling Uptown District is about to get a new Moxy Hotel, a welcome change of pace to a dismal year of coronavirus-linked business shutdowns that eviscerated the global hospitality industry.

Construction has just been completed on the 172-room Moxy Oakland Downtown, a boutique lodging that will represent a rarity for the East Bay’s largest city: one of the first new hotel projects in Oakland in roughly a decade.

The hotel is located at 2225 Telegraph Ave. in Oakland’s Uptown, a neighborhood of restaurants, nightspots, entertainment hubs, cocktail lounges, and theaters.

The hotel was jointly developed by Tidewater Capital, a San Francisco-based real estate firm with both development and investment expertise; and Graves Hospitality, a hotel management firm with veteran expertise.

“We’re pleased to open the doors of the Moxy and deliver a new placemaking component to Oakland’s vibrant culture and community,” said Kyle Winkler, director of construction with Tidewater Capital.

The new Moxy officially opened on Wednesday and began taking reservations and accepting guests, the hotel’s owners said. Moxy is one of Marriott’s brands and typically features smaller rooms and appeals to younger guests.

Tidewater Capital and Graves Hospitality built the hotel in what is known as an opportunity zone, which is a lower-income area where property investments can be made with considerable tax advantages.

The hotel was built using modular construction, a sustainable building approach that can create a more efficient construction process. Tidewater reduced the construction time by 25% using the modular technique.

“Tidewater partnered with Creative Growth, a local non-profit that serves artists with developmental, intellectual, and physical disabilities, to feature an array of eclectic, urban artwork throughout the hotel,” the developers stated in a prepared release.

The new Moxy will display the works of young Oakland writers in the hotel.

“This opening is an important milestone for our company as we look forward to continuing to foster long-term positive economic and social impact in the Bay Area,” Winkler said.

The hotel also will feature an on-site restaurant, La Palabra, whose chef will be the same culinary expert behind a popular Cuban cafe and parlor called Cana, also located in Oakland.

“Moxy is the very hip, millennial brand for Marriott,” said Alan Reay, president of Atlas Hospitality Group. “In that location, the hotel will do very well.”

The new downtown Oakland hotel has opened just days before a Silicon Valley lodging, AC Hotel Palo Alto, is scheduled to open its doors for the first time.

The hotel openings suggest that optimism could be on the upswing in the battered hospitality sector.

The Bay Area leisure and hospitality sector has been among the hardest hit by layoffs during the COVID era.

Restaurants, hotels, drinking establishments, and entertainment and arts centers lost 195,400 jobs over the one-year period that ended in February — a jaw-dropping 45% of all the jobs lost in the Bay Area during those 12 months.

Some signs have emerged lately that suggest the leisure and hospitality industry has begun to take tiny steps on what might be a torturous road to recovery.

“As we come out of the pandemic, a smaller hotel with smaller rooms will have a better chance of success than a large meeting-oriented hotel,” Reay said.