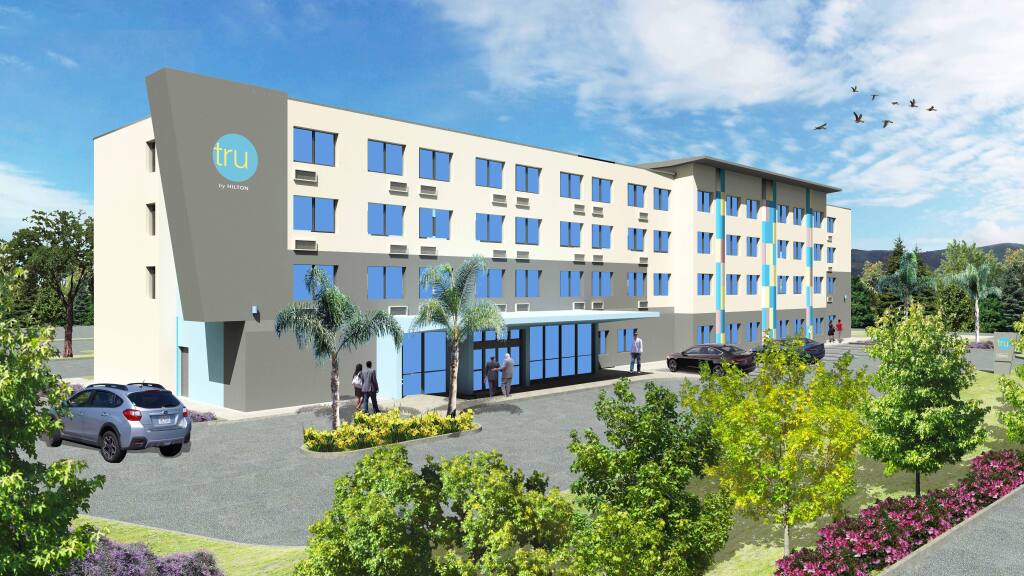 A rendering of the Tru by Hilton hotel proposal awaiting its building permit from Sonoma County, with plans for completion in summer 2021. (Optimal Hospitality, Inc.)

Hotel construction is booming across California as well as in the North Bay, according to a new report by a real estate brokerage specializing in such properties.

Fifty-one new hotels with 7,168 rooms have opened statewide so far this year, representing a 38% increase from last year, according to Atlas Hospitality Group.

Statewide, while new hotel openings in the state are up as of this month and 132 are under construction, that’s lower than the 194 reported last July, according the Irvine-based brokerage.

In Sonoma, Marin, Napa and Solano Counties, 83 hotels are in various planning stages, according to the survey. That includes five projects with 537 rooms under construction in the North Bay.

Some of these projects have been permitted for several years, and experts say some may never be completed.

“California hotels are enjoying record profits along with record revenues,” he said. “In addition, the trend by those buying existing hotels has pushed prices up to the point where it often makes more sense to build a new one. This growth is poised to occur despite increasing construction, labor and materials costs, as well as higher tariffs on furniture made in China favored by hoteliers. With all factors considered, the cost of building a new hotel has increased 15% to 20%.”

He said low interest rates and the promise of high revenues makes building a hotel a better bet for some developers.

“The pace of buying existing hotels has gone up, but more developers today are investing for the future. In the past, many builders put up new hotels with the intention of selling them right away. Now developers believe in building for the long term as they see California as a very good place to be,” Reay said.

Sonoma County has the largest number of pending hotel build-outs in backlog inventory, including 34 in pre-construction. Napa has 32 hotels in planning stages plus two under construction, and Marin has seven hotels awaiting a construction start date and three now being built. Solano has 10 hotel projects in the square-one category.

The five North Bay hotels now under construction include the AC Hotel in San Rafael, the Hyatt House in Novato; Stanley Ranch Resort and Cambria Hotel and Suites in Napa, and the Four Seasons Resort in Calistoga.

Elsewhere in Northern California, Sacramento County is also in the middle of a hotel building boom. Some 32 hotels with 4,191 rooms are in planning stages, an increase in lodging of 20% over last year. Earlier in 2021, the 124-room Hilton Garden Inn at the Sacramento Airport (Natomas) opened its doors, as well as the 105-room Home2 Suites by Hilton in Roseville.

There are nine additional hotels under construction in the state which will add another 1,045 rooms along with major hotel expansions in the works at both Thunder Valley Casino Resort near Lincoln in Placer County near Sacramento and Cache Creek Casino Resort in Yolo County.

While hotel developers are optimistic as momentum gains strength to fuel a new wave of hotel construction, Reay says that the majority of uncompleted hotel projects still on the record received permits before 2020.

As fixed costs continue to rise, he cautioned that only about 15% of the list of proposed hotels may actually be built if permits have expired or if the cost of construction, especially lumber and steel, access to labor and reasonably priced building supplies is prohibitive, as well as the inability to get bank construction financing.

He said the hotel model is changing with less emphasis on hotels with low margin restaurants and more focus on the residence inn concept with kitchenettes, pools, spas and other amenities.

Developers may also refile for permits to convert original concepts to private clubs or Airbnb-style accommodations with no reception desk, or they may elect to defer or abandon their proposed projects if balance sheets do not pencil out and wait for economic conditions to improve.

At the same time, Reay said there is a shortage of hotels, with 100 or more hotels in California being purchased by municipalities and nonprofits converted to low-income housing units or homes for the homeless in the Home Key project, a grant program for agencies to acquire hotels, motels, apartments, and other buildings to provide homes for people experiencing or at risk of homelessness.

“Atlas started issuing the bi-annual hotel development survey and separate sales survey 20 years ago using a fully staffed research team to track the market. We’ve never seen a market like this, with the price paid for existing properties selling at up to $2 million to $2.5 million per room in some cases. The market is really in flux and I never would have predicted the unprecedented volume of activity that is creating a bubble in the hotel industry today given the rapid run up of prices.”

He said there are two things that could dampen this rosy outlook, a continuing and deepening recession and an oversupply of hotels that could depress revenue as hoteliers fight for a smaller share of the pie.