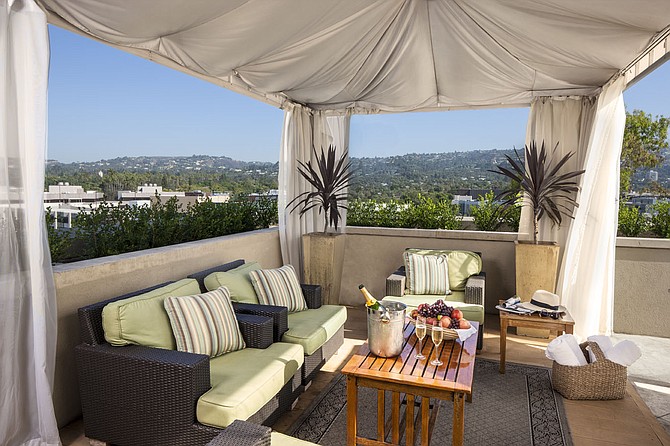 The Viceroy L’Ermitage has 116 luxury rooms along with a rooftop pool and other amenities.  Photo by G CRAWFORD

EOS Investors has emerged as the buyer of the famed Viceroy L’Ermitage Beverly Hills luxury hotel.

News broke in July that the 116-room hotel had a $100 million stalking horse bid but was headed to auction. The auction was later canceled, and the stalking horse bidder, now revealed to be New York-based EOS Investors, purchased the property.

“We are excited for the opportunity to expand the EOS portfolio with a world-class property in an unparalleled luxury hotel destination such as Beverly Hills,” EOS Investors President Jonathan Wang said in a statement.

In addition to hotel rooms, which average 805 square feet, the Viceroy L’Ermitage Beverly Hills has a rooftop pool and event deck. It also has a restaurant and bar, spa, fitness room and lounge.

The hotel is located at 9291 Burton Way, near Rodeo Drive.

“Viceroy L’Ermitage Beverly Hills represents a rare opportunity to acquire irreplaceable hotel real estate in a sought-after luxury market with significant long-term barriers to entry,” Tom Burns, vice president of EOS Investors said in a statement. “As we look to the future, we are focused on strategically investing capital to build upon the hotel’s storied legacy and position as a destination of choice for luxury travelers.”

“What probably sums up the price and the huge amount of interest has to be location, location, location. A lot of the buyers looked at the price that was paid last year at the Montage Beverly Hills … and I think that that had a lot to do with the interest and the price point that people were at,” said Alan Reay, president of Atlas Hospitality Group.
EOS Investors has a portfolio of East Coast hotels, and Reay said the company is not focused on any one product type or on L.A.

“It really is an interesting company, and it’s also interesting that they purchased properties, a couple of them in 2019 and the most recent one in March of 2020,” he added. “A lot of buyers that we’ve dealt with, if they bought in 2018 or ’19, they are just trying to manage what they have and not out there actively pursuing new acquisitions so it’s interesting to see what they are doing.”

The hotel was one of several Low properties to be auctioned off after he was investigated in a $2.5 billion fraud scheme. He was accused of embezzling from a Malaysian sovereign fund.

The Viceroy L’Ermitage Beverly Hills was the last of Low’s seized assets to be sold.
Despite the Covid-19 pandemic’s negative impact on the hospitality industry, there have been other recent sales.

The most noteworthy is the iconic Georgian Hotel on Ocean Avenue in Santa Monica. The 84-room property sold in August for $62 million.

Reay said the Georgian and Viceroy L’Ermitage Beverly Hills were “assets that typically do not become available. That’s why you saw those deals trade.”

“These two assets are in irreplaceable locations and as long as they are looking at a long, long-term horizon, I’m sure (the buyers will) be able to look back at it and say these were good acquisitions,” he added.

Generally though, Reay said, the dollar volume for hotel sales during the Covid-19 pandemic has been down more than 80%.

“We have a huge disconnect between the buyer and the seller expectations. And, quite honestly, we have a lot of buyers that are sitting on the sidelines waiting for distressed deals. They have not really materialized,” Reay said, adding that he expects to see more sales next year.