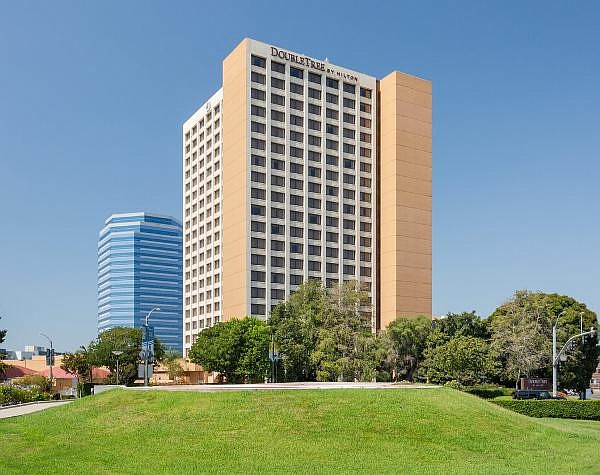 A pair of hotels in the vicinity of the Anaheim Resort region have traded hands in separate deals topping $100 million, the Business Journal has learned.

The two deals, coming on the heels of three other recent transactions previously reported in Anaheim that totaled another $120 million, mark the latest sign of rising investor interest for properties that cater to Orange County’s largest tourist base, which is beginning to see increased activity amid loosening travel restrictions in the state.

The DoubleTree by Hilton Hotel Anaheim, a 461-room hotel in Orange not far from the Anaheim Resort region, is the latest notable area property to change hands.

AWH Partners LLC and Apollo Global Management Inc., both of New York, are the buyers for the DoubleTree, which is next to the Outlets at Orange shopping center. It’s the largest hotel in the city of Orange, and ranks No. 18 among all hotels in OC by total room count.

The DoubleTree marks the first local buy in the county for the AWH-Apollo joint venture.

Spire Hospitality, the Irving, Texas-based hotel management subsidiary of AWH, will manage the property moving forward, taking over from Hilton.

The second deal to occur in the Anaheim region in the past week: Irvine-based Atlas Hospitality Group brokering a $21.8 million sale for the 152-room Candlewood Suites Anaheim.

The Candlewood deal works out to a price of around $143,000 a room for the property, located at 1733 S. Anaheim Blvd., a few blocks away from Disneyland Resort.

Terms of the larger DoubleTree purchase were not disclosed by the buyers.

Property records indicate the deal was a complicated one, involving both cash and the assumption of debt.

The cash component of the deal ran about $51.4 million, property records indicate.

Regulatory documents pertaining to a 2015 commercial mortgage-backed securities deal tied to the property’s mortgage indicate that at least another $50 million in debt was issued for the DoubleTree, via multiple loans.

At least one of those loans was transferred to special servicing last year “due to payment default,” according to a CMBS-related analyst report last year from Fitch Ratings.

Sources indicate that the DoubleTree’s buyers likely assumed close to $30 million of the prior debt as part of the transaction, which would put the full purchase price in the neighborhood of $80 million, or $175,000 a key for the hotel.

The buyers of the DoubleTree acknowledged their purchase wasn’t easy to complete, starting around the time the property’s loans apparently went into default.

The deal “required discipline and focus through much of the pandemic,” said Russell Flicker, co-founder and managing partner of AWH Partners, in a statement.

AWH, founded in 2010 by a group of former Blackstone Group employees, said the hotel will undergo a renovation following its sale. It was first built in 1984.

“We expect this property to outperform its competitors as we complete a fulsome renovation and corporate demand in the city resumes,” Flicker added.

Another newcomer to the OC hospitality market is American Koyu Hotels LLC, a hotel owner and operator based out of Japan with several California properties.

It recently closed on the Candlewood Suites, a six-story hotel a short walk from Disneyland and about 2 miles from the DoubleTree.

That firm acquired the hotel—then a Greenwood Suites—in 2015 for a reported $20 million and invested several million dollars into a rebranding that converted the property into a Candlewood Suites.

“Though Anaheim was one of the hardest hit markets in California during the pandemic, recent deals suggest investors are bullish on the market rebounding,” said Atlas Hospitality’s Justin Myers, who represented the deal on behalf of the seller. Executive Vice President Oliver Shah represented the buyer.

The new owner is expected to invest in a soft renovation for the hotel, which was first built in 1957.

With the two new deals, a total of five notable hotels in the Anaheim area have sold in the past month with an investment value­ topping $220 million.

The deals include four investors, all of whom are new to the Orange County market.

The Business Journal last week reported on three hotel transactions in the city totaling about $120 million.

The largest of the deals was the recently built Element Anaheim Resort Convention Center, sold for $64.7 million.

At nearly $372,000 per room, the sale sets a new price-per-room record for the city of Anaheim, Reay notes.

“The prices being paid today are way higher than what people expected, even pre-COVID-19,” Reay said.