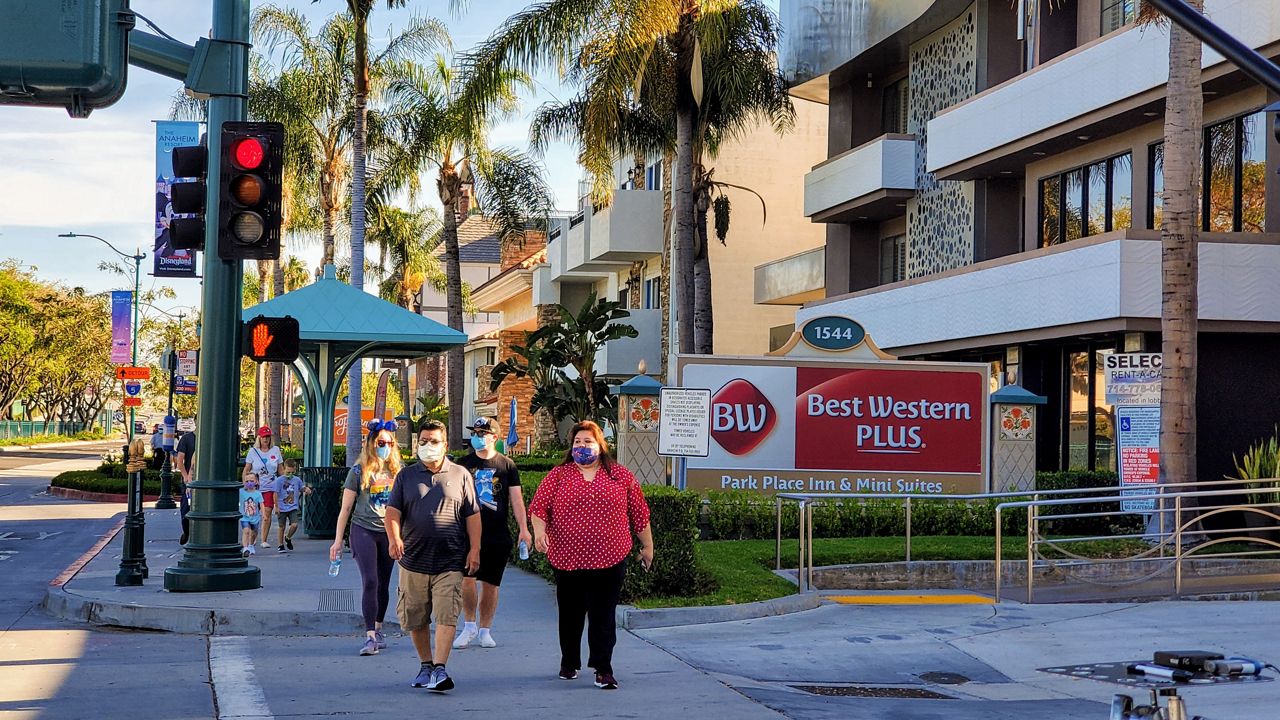 ANAHEIM, Calif. — Just as things began to look up for the hospitality industry, the delta variant could upend its momentum.

While not at pre-COVID levels yet, occupancy, daily rates and revenue have all increased for hotels in Los Angeles and Anaheim since California lifted coronavirus restrictions.

What You Need To Know

But the spread of the more highly contagious delta variant and a surge of new COVID-19 cases and hospitalizations, mainly among the unvaccinated, has some hoteliers worried.

“Right now, hotel owners are taking a ‘wait and see’ attitude to the new delta variant and are hoping that we do not have to go in to another complete shutdown,” said Alan Reay, president of the hotel brokerage firm Atlas Hospitality. “If this were to happen, it would completely disrupt business and exacerbate the employment problem all hotels are faced with, i.e. rehiring workers.”

The hospitality industry has been among the hardest-hit sectors since the pandemic began last year. Experts said a combination of stay-at-home and lockdown orders, closures of several attractions, a sharp drop in travel, and other restrictions took an incredible toll on the hotel industry that continues to this day.

According to the American Hotel and Lodging Association, the pandemic wiped out ten years of hotel job growth. By the end of this year, hotels will have fewer than 75,000 workers than pre-COVID levels in 2019.

But the longer people were cooped up, the more demand was growing. Hotel occupancy and daily rates began to pick up by spring this year, especially in Southern California’s leading markets — Los Angeles and Anaheim.

With more people getting vaccinated and California having inched its way towards reopening on June 15, hotels began to fill up with local and domestic tourists. The reopening of Disneyland and other theme parks helped fuel the leisure travel market.

In 12 weeks this past spring, hotel occupancy in LA surpassed 70% occupancy, the LA Tourism and Convention Board reported. During that time frame, two weekends had 80% hotel occupancy.

On Memorial Day weekend, hotel occupancy in LA was 82% — double from the previous year, the tourism board reported.

When California finally reopened its economy in mid-June and dropped several COVID-related restrictions, hotel occupancy shot up. In Anaheim, the home of Disneyland, hotel occupancy was at 70% in June, compared to 45% the previous year, according to the global hospitality data and analytics company STR.

So far in July, Anaheim and LA’s hotel occupancy are 78% and 74%, respectively. Last year, both hotel markets sat in the 46% occupancy range in July.

RevPAR — or revenue per available room — a key performance indicator for hotels, has also increased this year, STR reported. Last year, Anaheim hotels were averaging $36 RevPAR in July, while LA was at $55. This year, hotel RevPAR has jumped to $85 in Anaheim and $132 in LA. Additionally, the average daily rate has jumped year-over-year from $75 in July 2020 to $108 in 2021 in Anaheim. In LA, the daily rate went from $120 to $178 in the same timeframe.

While hotel occupancy, daily rate and RevPAR have all increased since California reopened on June 15, it’s still not at pre-COVID levels. According to STR, Anaheim and LA both posted 83% occupancy levels in July 2019. The average daily rate was $187 in LA and $116 in Anaheim. RevPAR has yet to catch up to pre-COVID levels as well.

Still, there is a lot of hope from hoteliers — especially in Orange County — that demand would continue, Reay said.

“Since the travel restrictions have been lifted, Orange County hotels are doing extremely well,” said Reay. “Hotels in the coastal markets are enjoying some of the highest room revenues on record, and even business hotels and Anaheim has bounced back.”

No one is expecting another lockdown or government-imposed closure any time soon. But there are signs. Several counties, including LA, are requiring people to mask up indoors regardless of vaccination status.

In Orange County, health care officials and political leaders issued a letter to the public “encouraging residents to stay vigilant with COVID-19 prevention measures, testing and vaccinations in order to keep our residents safe and businesses open.”

Reay said the hotel industry couldn’t afford another shutdown if it occurs. Many hoteliers had to rely on the government’s Paycheck Protection Program and worked with their banks to survive. No one knows if banks will do that again.

“[Another shutdown] would be a serious blow to the hotel industry, and if the banks did not agree to work with owners on deferring loan payments as they did during COVID-19, it could be catastrophic,” said Reay.