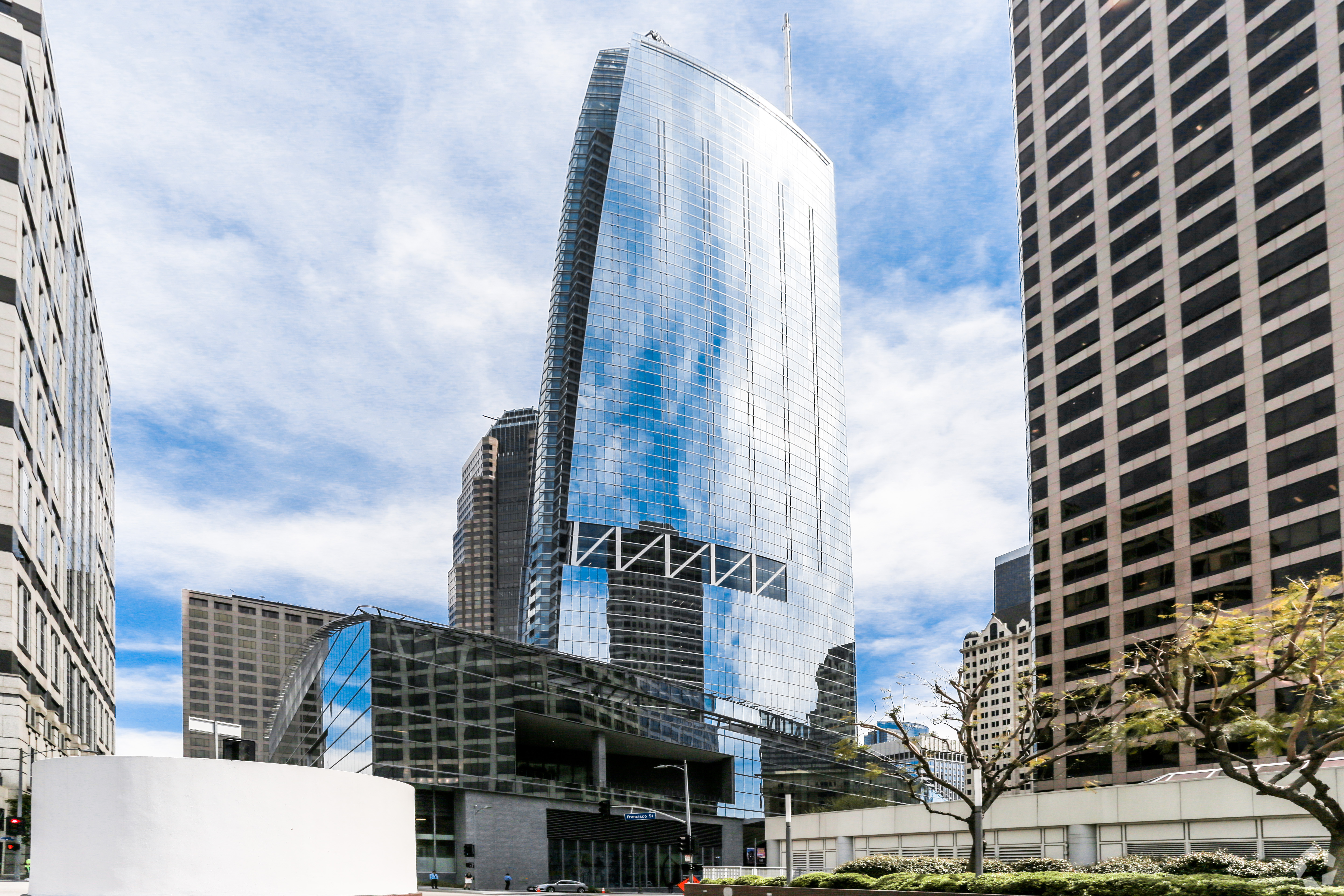 Korean Air Lines is lending $950 million to its Hanjin International Corp. subsidiary as part of a refinancing of Wilshire Grand Center, which houses commercial offices and an InterContinental hotel in downtown Los Angeles. (CoStar)

The airline owner of Los Angeles’ tallest tower may be seeking to sell some or all of it as it extends $950 million in loans to the building’s hotel operator. The move comes as the coronavirus pandemic further hammers the hospitality industry.

Korean Air Lines plans to provide the funds to its fully owned U.S. hotel operator, Hanjin International Corp., for the soaring Wilshire Grand Center office and hotel tower in downtown Los Angeles. The prominent, 1,100-foot tower complex became the city’s tallest building when it was built in 2017 at 900 Wilshire Blvd.

According to a Korean stock exchange disclosure from Korean Air, translated into English, the company is arranging the loans on the Los Angeles property to cope with the deterioration of management in the U.S. hotel industry.

Hanjin has $900 million in debt at the property maturing this month. The firm had stalled in negotiations with lenders over refinancing debt owed on the 73-story, mixed-use Los Angeles tower that contains an 889-room InterContinental hotel, restaurants and offices.

The deal is meant to help refinance the loans and provide funds to keep hotel operations at the property going.

The announcement came this week as the Korea Economic Daily news site reported that Korean Air is in talks with a potential U.S. investor to sell part of its stake in Hanjin and its real estate holdings.

Korean Air Lines officials in Los Angeles did not immediately respond to a request from CoStar News for a comment.

The coronavirus pandemic has been especially hard on hotels, airlines and other industries tied to recreational and business travel, which have ground to a near halt in most major U.S. cities during the past six months.

Resulting drops in hotel business have presented challenges to property owners now faced with refinancing debt or attempting to sell buildings amid the hospitality industry’s worst year since the Great Recession a decade ago.

Seoul-based Korean Air Lines announced that its board of directors has agreed to extend the loans to its Hanjin International subsidiary.

Korean Air Lines officials said the company plans to borrow $300 million from the Export-Import Bank of Korea and contribute its own $650 million to finance a new loan of $950 to Hanjin International.

The airline company itself, alongside the rest of the air travel industry, has faced hardship during the pandemic. It said its revenue declined 44% in the second quarter over the prior year because of the COVID-19 crisis while global passenger demand has been stagnant, according to its financial filing.

The effects of the pandemic are especially acute for hotels in downtowns and other central business districts that rely heavily on corporate travelers, now that nearby offices are frequently empty or partially occupied as many employees work from home.

“The downtown hotels in L.A. have been hit extremely hard, with a number of them closed down altogether,” said Alan Reay, president of hotel brokerage and research firm Atlas Hospitality Group, which tracks California trends.

According to the latest available data from travel research firm STR, a CoStar Group company, occupancy at downtown Los Angeles hotels was just 46.2% for the week of Sept. 6-12, compared with 81.9% a year ago. The average daily room rate was down 26.5% at $146.22, but because of low occupancy the revenue per available room was just $67.57, a drop of 58.5%.

Reporting metrics for the top 25 U.S. hotel markets, STR noted that urban hotels collectively posted 36.4% occupancy during the month of August, well below the 51.2% occupancy for suburban hotels.

STR Senior Vice President Jan Freitag said hotel market conditions in downtown Los Angeles and other central business districts are unlikely to improve until there is a rebound in group business travel, including corporate conferences, and transient business trips taken by individual workers to meet with clients or colleagues. Both categories are currently at a virtual standstill in most major cities because of pandemic-related restrictions.

“I’m not flying to another city and staying in a hotel to meet with you on business if you’re not going to be able to come to your office,” Freitag told CoStar News. “We might as well just have the meeting on Zoom.”

Downtown Los Angeles office owners were struggling with vacancies before the pandemic’s arrival.

Wilshire Grand Center was not immune after opening in 2017, following an extensive redevelopment by Korean Air and its Hanjin subsidiary that included development of the InterContinental hotel along with new restaurants and commercial office space.

Ryan Patap, director of market analytics for CoStar Group in Los Angeles, said the property has struggled with office leasing since new elements were completed three years ago, and was just 35% preleased at the time the offices were delivered in 2017. Occupancy has since improved, but office vacancy in the property remains above 40%.

“While it’s a plus that the building has some of the newest office space in Downtown Los Angeles, that also means its asking rates are towards the top-end for the area,” Patap said. “Many tenants that decide to locate downtown tend to be cost conscious.”